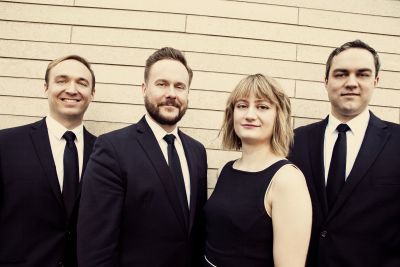 The Chicago-based Spektral Quartet returns to the Goshen College campus to perform Joseph Haydn’s “The Seven Last Words of Christ” on Sunday, March 29 at 4 p.m.

General admission tickets are $15, available online at goshen.edu/tickets or by calling (574) 535-7566. Goshen College students are admitted free with ID.

There is no improving upon the genius of Haydn’s string quartets. There is, however, some room for innovation when it comes to “The Seven Last Words of Christ, Op. 51.” This string quartet transcription from the orchestral original was likely not penned by the hand of Papa Haydn, and the Spektral Quartet delivers a fresh new version of this sacred masterpiece work.

Working from the orchestral score, Chicago-based arranger Joe Clark has been conspiring with Spektral since 2012 to resurrect woodwind lines and rebuild dubious chord voicings in an effort to return the quartet closer to the integrity of Haydn’s original. Given the historical weight of “Seven Last Words” as a revered Holy Week tradition, Clark and the quartet endeavor to give concertgoers an elucidated listening experience, rather than an unfamiliar one. It is a piece of profound reflection and stirring depth, and the Spektral Quartet is delighted to be returning to Goshen for this special performance.

The exquisite acoustics of Sauder Concert Hall provide a perfect setting for this moving work, one which is frequently as potent for the secular as the religious in its portrayal of abandonment, familial bonds and hope.

Founded in 2010, the Spektral Quartet is widely regarded as one of Chicago’s most magnetic and forward-thinking chamber ensembles. The group’s inclusive approach to concert format, shifting the role of audience member from spectator to ally, has earned it a loyal following within and beyond the city limits.

Since its inception, the Spektral Quartet has sought out the discourse between the masterworks of the traditional canon and those written this decade, this year, or this week. Rather than simply pairing Brian Ferneyhough with Josef Haydn or Thomas Adès with Béla Bartók, though, the group offers listeners an even more elastic and absorbing experience through its Sampler Pack concert format. For these performances, shorter works and single movements are curated in a set list containing a menagerie of musical styles that span centuries. The unexpected similarities and enticing contrasts between two or three composers becomes a conversation between twelve.

For its 2014-15 season, AMPLIFY, the quartet unveils its four largest-scale commissions to date as well as centerpieces from the traditional canon. These adventurous new works push the ensemble into uncharted and thrilling new territory.

The Spektral Quartet serves as ensemble-in-residence at the University of Chicago and was invited in 2013 to join the Rush Hour Series’s Back-of-the-Yards project, which offers year-long music education and outreach in one of Chicago’s most under-served neighborhoods.