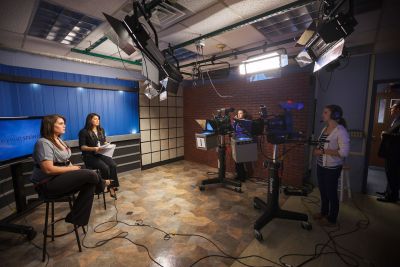 “We are excited and honored to be recognized once again with this award, said Seth Conley, assistant professor of communication. “Our students work incredibly hard and we set high expectations for them.”

“The other schools are tough and it’s no secret Goshen College is one of the smallest in the competition,” Conley said. “We appreciate being able to compete with much larger schools because it allows us to show that our graduates are ready to compete in the professional market with graduates from larger universities.”

For the television awards, students were judged on their work from the college’s bi-weekly television news broadcast, The Correspondent, and their film work with FiveCore Media, an on-campus video production company that provides students with professional experience in serving internal and external clients.

The Correspondent is produced by Goshen College students and distributed via the campus cable system and online. Conley is the adviser for The Correspondent, and Assistant Professor of Communication Kyle Hufford is general manager at FiveCore Media.

For the radio awards, students were judged on their work from Goshen’s on-campus radio station, 91.1FM The Globe (WGCS) (globeradio.org). WGCS is run by Goshen students and community volunteers. The station provides 24-hour programming, including music, news, public affairs and sports.

“The broadcasting major at Goshen College is strong, as evidenced by the success of our television and radio components over the past six years,” said Jason Samuel, WGCS general manager and assistant professor of communication. “Our students understand the hard work behind a commitment to excellence. This culture continues to grow and serve the Goshen College Communication Department and the greater Goshen community.”

A complete list of the IASB School of the Year award winners for the past 10 years:

The Goshen College Communication Department offers majors and minors in broadcasting, film studies, journalism, public relations, writing and multimedia studies. Students become engaged in co-curricular activities in their first semester, including The Record, the campus newspaper, 91.1 The Globe (WGCS), the campus radio station, The Correspondent, a television news show, FiveCore Media, a video production company, as well as various other written publications and internships. Courses are interdisciplinary, teaching students the technical skills needed to operate state-of-the-art equipment while also teaching how to communicate effectively with an eye toward peace and justice.