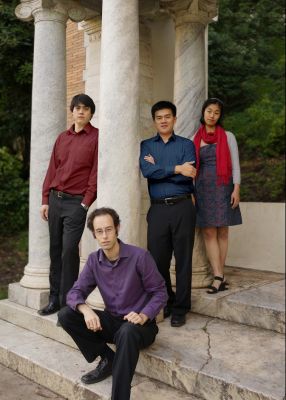 The Telegraph Quartet, a young rising string quartet based in the San Francisco Bay area, will perform a chamber music recital in the Goshen College Music Center’s Rieth Recital Hall on Sunday, Oct. 5, 2014. The recital, part of the 2014-15 Rieth Chamber Series, will begin at 4 p.m.

General admission tickets are $15, available online at goshen.edu/tickets or (574) 535-7566. Goshen College students are free with ID.

The Telegraph Quartet consists of violinists Eric Chin and Joseph Maile, violist Pei-Ling Lin, and Jeremiah Shaw on cello. The group was formed in September 2013 and soon after became the first San Francisco-based ensemble ever to win the prestigious grand prize in the international Fischoff Chamber Music Competition at Notre Dame. The quartet was selected to be one of the Shouse Ensembles at the Great Lakes Music Festival, directed by Paul Katz, for the summer of 2014.

The members of the quartet are graduates of top conservatories and universities including The Juilliard School, The Cleveland Institute of Music, Rice University and San Francisco Conservatory of Music.