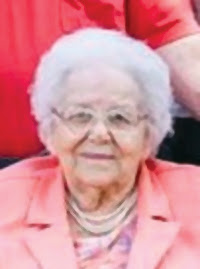 Emma Richards, the first Mennonite woman to be ordained as a pastor of a Mennonite congregation, died Sept. 6 at age 87 in Goshen, Ind.

Born March 17, 1927, she graduated from Goshen College in 1949 and received a bachelor of theology degree at Goshen Biblical Seminary. She then taught at Bluffton (Ohio) College (now University).

Richards and her husband, Joe Richards, served with Mennonite Board of Missions in Japan from 1954 to 1966. They also were co-pastors of an Ohio Presbyterian church for two years while attending graduate school. In 1968, Joe became pastor at Lombard (Ill.) Mennonite Church. They left Lombard in 1991 to become interim ministers for Illinois Mennonite Conference (IMC) and retired in 1996.

Lombard Mennonite Church made the Richards a pastoral team in 1971, then sent a proposal for ordination to IMC. During a discernment meeting at the conference, the church representatives were

asked if this proposal was motivated by the fact that Lombard would become the first Mennonite congregation to ordain a woman as pastor. Lombard was already the first church in its conference to use an organ regularly, have a permanent choir and have most females attend worship without a covering.

During the spring of 1972, IMC’s leadership commission recommended that Emma receive a pastoral license for a period before ordination be re-examined. It said her call to ministry, her education and experience were not being questioned; the only issue being addressed was the fact that she was a woman. A committee that included men and women formed to address the issue and eventually recommended the ordination of Emma Richards to IMC. The conference approved the motion on April 7, 1973, while making clear this was a specific case and that this action did not approve of ordination being open to all women. Richards’ installation service was held at LMC on Oct. 15, 1972, but she was not officially ordained by the conference until June 17, 1973.

Ann Allebach was actually the first Mennonite woman to be ordained. She was ordained by the General Conference Mennonite Church in Philadelphia on Jan. 15, 1911. However, she was never installed as a pastor of a Mennonite congregation. There were no other women ordained between Ann Allebach and Emma Richards.

Richards preached during Sunday morning service at the Mennonite World Conference Assembly in Strasbourg, France, in 1984.

Richards once said, “A woman has to work twice as hard to prove herself-be a better student, be a better preacher and manage an effective household.”

She is survived by her husband, along with two daughters, Kathryn (Jon) Beckwith and Lois (Jim) Woods, both of Hillsdale, Mich.; a son, Evan (Laura) Richards, of Villa Park, Ill.; nine grandchildren; five great-grandchildren; a sister, Elaine (Ron) Rich, of Bluffton, Ohio; and two brothers, Dan and Elvin (Barb) Sommers, both of Kokomo, Ind.

She was preceded in death by a brother Sam Sommers.