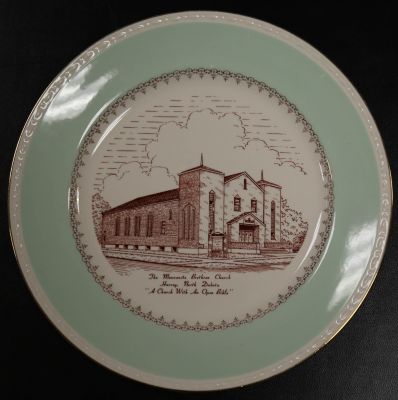 A variety of mugs, plates and T-shirts that explore Mennonite identity will be on display in the Harold and Wilma Good Library basement gallery at Goshen College.

The exhibit, called “Mennonite Identity in Mugs, Plates and T-Shirts,” opens on Tuesday, Aug. 26 and will be on display through Sunday, Nov. 16. A reception will take place on Sunday, Sept. 7 from 3 to 5 p.m.

The exhibit documents the way that Mennonites have used material culture to express religious and ethnic identity in public, in the workplace and in the home.

Some of the featured objects are historical, such as T-shirts worn by Mennonite conscientious objectors as part of the Pax Program, an overseas service organization begun in 1951. Other objects are contemporary, like the “Where’s My GLBTQ Prof?” T-shirt worn by some students around Goshen College’s campus today.

The gallery will showcase mugs, plates and T-shirts from a variety of Mennonite organizations: colleges, nonprofit agencies and congregations. 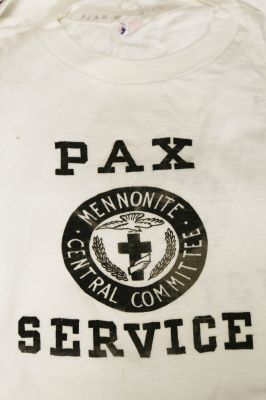 According to Ervin Beck, the exhibit organizer, the phenomenon of using commercially produced objects to project Mennonite identity coincided with the trend of Mennonite assimilation into American culture that occurred during World War II.

The exhibit will feature pottery from Royal Tichelaar Makkum, a Dutch company that has been owned since 1676 by the Tichelaars, a Mennonite family. The company produced fine porcelain pottery for the general market and also special Mennonite-themed plates for commemorative and display purposes.

Kate Yoder, a senior art and English writing double major, curated the exhibit. As the curator, Yoder’s main task was to organize the objects and then arrange the physical layout of the exhibit.

“I’ve always had an interest in curating, but this is the first chance I got to try it out,” Yoder said. “It was a challenge to decide how to best categorize these objects and then figure out appropriate ways to display them in a three-dimensional space. I learned that a curator’s job is complex. It requires a mind oriented to organization, practicality, design and conceptualization.”

Yoder said she was drawn to this particular exhibit because of its playful and tongue-in-cheek nature. She attributes her interest in Mennonite identity to the research she did during the 2012 Maple Scholars summer research program with John D. Roth, professor of history.

“I researched Anabaptist cultural identity in the context of martyrdom, and this sparked my interest in the way Mennonites display their culture,” Yoder said.

The exhibit is sponsored by the college’s Mennonite-Amish Museum Committee. The exhibit is open during library hours, which vary throughout the school year. See the Good Library website for current hours.