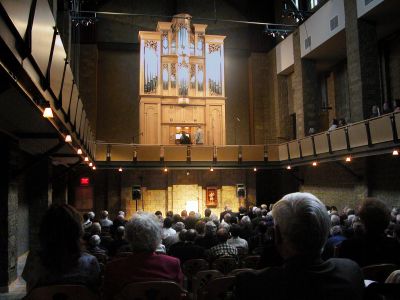 The Goshen College Music Center has announced the performances for the 2014-15 Rieth Chamber Series. The series, which attempts to make classical chamber music more accessible to the Goshen community, will feature six concerts by outstanding chamber music ensembles and organists on GC’s Taylor and Boody pipe organ, plus a bonus concert and dessert reception for series subscribers only.

Series subscriptions, which include tickets to all six concerts, plus the bonus concert and dessert reception, are now available. The six-show ticket packages are $120. Subscription forms can be found online at gcmusiccenter.org/concerts/riethseries. For questions about ticket availability, pricing, reservations and more, contact the Welcome Center at (574) 535-7566 or email welcomecenter@goshen.edu. The Welcome Center is open Monday through Friday from 9 a.m. to 3 p.m. Tickets to individual concerts will be for sale as available via the Welcome Center, online at www.goshen.edu/tickets or at the door.

Sunday, Oct. 5, 2014, 4 p.m.
Telegraph Quartet, Rieth Recital Hall
Formed in 2013 and based in the San Francisco Bay Area, the acclaimed Telegraph Quartet will perform a virtuosic string chamber music concert. The Telegraph Quartet was awarded the coveted grand prize and the gold medal in the senior string division at the 2014 Fischoff National Chamber Music Competition, out of 48 competing ensembles from across the nation and around the world.

Sunday, Jan. 11, 2015, 4 p.m.
Merling Trio, Rieth Recital Hall
The Merling Trio will bring a Hungarian flavor to Rieth Hall with pieces such as the “Hungarian Dances” by Brahms and the trio in F Minor by Dvorak. While in residence at the School of Music at Western Michigan University, the Merling Trio has performed internationally and produced several critically acclaimed recordings.

Sunday, March 29, 2015, 4 p.m.
Spektral Quartet, Sauder Concert Hall
The Chicago-based Spektral Quartet returns to Goshen College on Palm Sunday to perform “The Seven Last Words of Christ” by Joseph Haydn. This gifted ensemble is in residence at the University of Chicago and is known as one of Chicago’s premier string quartets.

Sunday, May 10, 2015, 4 p.m.
10th anniversary organ concert by organist Kevin Vaughn, Rieth Recital Hall
In May 2005, the Goshen College Music Center christened its Taylor & Boody pipe organ with the name, “Opus 41.” Now, ten years later, we invite you back to celebrate its anniversary. Kevin Vaughn is the director of music and organist at St. Vincent De Paul Church in Elkhart and an organ instructor at Goshen College. Featuring J.S. Bach, Gaston Litaize and Anton Heiller, Vaughn’s organ recital will highlight the tones and harmonies that effectively complement Opus 41.

Rieth Chamber Series subscribers will also be rewarded with a special bonus concert and dessert reception:

Saturday, Feb. 14, 2015, 7:30 p.m.
Pianists Luke and Mary Rose Norell, Sauder Concert Hall
Luke and Mary Rose are both on staff at the Goshen College Community School of the Arts in the Music Center. Luke has a doctoral degree in performance from Indiana University Bloomington. Mary Rose has a doctoral degree in performance from Northwestern University.  The couple will perform a piano duet in Sauder Concert Hall.