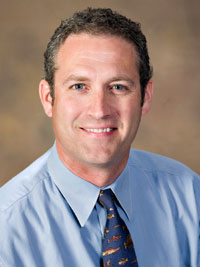 The Goshen College board of directors has appointed Conrad Clemens of Tucson, Arizona, as its new chairperson.

Clemens, a 1985 Goshen College graduate and current professor of pediatric medicine and associate dean at the University of Arizona College of Medicine, was elected by the board to replace outgoing chair Rick Stiffney, whose term as board chair ended in June.

“It is an honor to serve on the board of directors for Goshen College and now as its chair,” Clemens said. “Goshen College profoundly shaped my faith and gave me both a vision and roadmap for how I could positively affect the world around me.”

Clemens, whose term as chair began on July 1, has served on the GC board since July 2011.

As the associate dean for graduate medical education at the University of Arizona, Clemens is responsible for overseeing more than 700 residents and fellows who make up the College of Medicine’s 60-plus training programs. In addition to his clinical, teaching and research roles, Clemens also serves on the board of directors of the Arizona chapter of the American Academy of Pediatrics.

Clemens is married to Andrea Gerlak, an internationally known scholar and researcher in the field of environmental studies and water conflict. They have two children, Ella (10) and Lucas (8). They attend St. Francis in the Foothills United Methodist Church in Tucson.