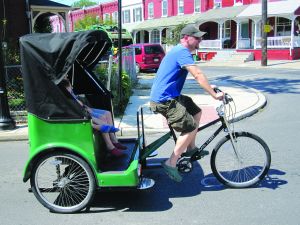 I’d like to tell you a little about our alumni board chair, Peter Eash-Scott ’99. He’s both a very unique individual and the embodiment of so many of our alumni and their intentional choices that make a difference in the broader world every day.

Peter is a stay-at-home dad, while his wife, Rachel ’98, works as a physician at Health Ministries Clinic in Newton, Kan. If you were to meet Peter on the street, he would most likely be riding his pedicab (a bicycle rickshaw). Peter purchased his pedicab four years ago to haul his two young children around Lancaster, Pa., where they lived at the time. He took Daniel, age 10, and John, age 6, to school, piano lessons, soccer practices and trips to the store.

For Peter, this is a preferred mode of transportation. “A pedicab is the next best thing to walking,” he said. “I like how it helps me engage the environment and the people around me (as well as the boys) compared to the isolation of being enclosed inside an automobile.”

While it’s great exercise, the extended and quiet time during pedicab commutes also gives Peter and his sons a unique opportunity to connect and learn from each other. On the morning of the 50th anniversary of the “March on Washington” last year, he and his sons listened to Martin Luther King Jr’s “I Have a Dream” speech, inspiring one of the boys to even request that they listen to the speech again on the ride home.

In addition to being the primary child caregiver and household manager, Peter enjoys sharing his playwriting and acting talents broadly. He and Greg Wendling ’99 have collaborated on several traveling comedy productions as the Squendling Brothers. And in February 2014, his one-act play “Stay Tuned” premiered on the GC campus after receiving the honorable mention in the college’s 2012 Peace Play Competition.

Thoughtfully caring for the environment, relationships and broader justice issues in the world are attributes of many GC graduates. Like many alums, Peter also does this quietly, everyday, and with good humor and creativity. What’s unique, though, is that he’s a pedicab dad.

I am so thankful for all that Peter brings to his role as chair of the alumni board, and thankful to all of our alumni for making your own unique mark in your family, church, work, community and world through everyday choices!