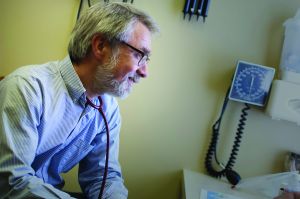 During the winter of 2008-09, more than 20 percent of the workers in Goshen, Ind., were unemployed. In the city’s north side neighborhood, the situation was worse.

Staff at the neighborhood’s school, Chamberlain Elementary, learned that children in the school lacked food on weekends. The school started sending food home with children on Fridays.

Across the street from the school, employees of Maple City Health Care Center (MCHCC) saw that even with a 90 percent income-based discount, unemployed patients with diabetes or high blood pressure felt they couldn’t afford care and were missing appointments. Untreated diabetes can result in the loss of a limb or death.

“Since the beginning of the center in 1989, our mission has been to foster healthy community in our neighborhood by providing and promoting affordable, accessible health care,” said James Nelson Gingerich ’80, the center’s founder and director.

As a young man, James joined a small group of Goshen College students and alums to live and work in the neighborhood. Realizing that many of his neighbors needed health care, James decided to go to medical school with the intention of returning to be a doctor.

Years later, when he had finished a degree at the Pritzker School of Medicine at the University of Chicago and a family practice residency in Indianapolis, James, his wife, Barb Nelson ’76, and their two sons moved into a house down the street from Chamberlain School. James became MCHCC’s first doctor-director-accountant-janitor.

Thanks to James’s leadership (his official title at MCHCC is Guardian of Vision), the center is guided by its mission and its stories. It was through storytelling that the people who cared about the center came to realize that in most of the iconic stories important to the center, when people focused on needs, needs multiplied. When they focused on assets, assets multiplied.

“The stories teach us that operating out of abundance rather than fear frees our imagination and creativity,” said James. “In 2009, when our staff and the members of our board of directors focused on the assets of our patients, we realized that unemployed people have the asset of time.”

With the city’s unemployment rate at about 20.2 percent (a year earlier it had been 5.2 percent), many of the helping organizations in Goshen in 2009 were overwhelmed and desperately needed volunteers. “We decided that if our patients used their asset of time to volunteer for these organizations, they would be helping us accomplish our mission of fostering a healthy community,” said James. “In return, we would offer patients $10 credit for every hour they volunteered. In this way, patients who had no cash could still contribute to their health care.”

The center called the program More than Money because people have more to offer than only money.

Arturo was one of the center’s diabetic patients who had missed appointments. Maria Hershberger ’96, part of MCHCC’s billing staff, told Arturo about More than Money. Arturo liked the idea of volunteering for LaCasa, a local housing rehabilitation organization. Maria gave Arturo vouchers that, when signed by a LaCasa representative, could be used like cash to pay off Arturo’s MCHCC bill.

Arturo took the vouchers, but six months went by with no word. It looked like Arturo had disappeared.

Then, one morning, Susana Alonzo, a front desk receptionist, looked up to see a very different Arturo walking through the front door.

“Before that morning, he looked dejected and bent over, unwilling to look me in the eye,” said Susana. “That morning, he walked in like a king carrying a treasure. He handed me a whole stack of signed More than Money vouchers. With a big smile, he said, ‘Ahora puedo pagar.’ (Now I can pay.)”

“Improving patients’ sense of self-worth was a benefit none of us anticipated from the More than Money program,” said James. “As with many of the stories here at the center, the story about More than Money turned out to be a story about multiplying abundance, which is, after all, a joyful and Christ-like way to live.”

In fact, James steers the center by the light of Christian values. “At its heart,” James reflected, “Maple City Health Care Center is an attempt to emulate the early church with its spirit of inclusion and reconciliation and its ability to use and multiply the gifts of disparate people.”

While the employment rate on the north side of Goshen has improved since 2009, qualified patients of MCHCC continue to be able to pay for medical care at the center by volunteering in the community. Some volunteers help at Habitat for Humanity. Others distribute food and clothing at a local agency that serves low-income persons. Some work toward a GED degree, while others learn to speak English.

MCHCC’s innovations recently inspired the Robert Wood Johnson Foundation to choose the center as one of 31 exemplary primary care practices from across the nation. The foundation will use some of MCHCC’s innovations as a model for other practices that strive to offer affordable, high quality health care.

With more than 15 Goshen College alums on staff, MCHCC is ready for a new chapter in the journey toward a healthier community. The center plans to open a second site in a building known locally as the Abshire mansion. The mansion occupies nearly four acres in the middle of the north side neighborhood.

Whether it’s a mansion or a home, the new site will be a setting for even more stories about God’s abundance and the joy of our journey toward a healthier community.

This piece was written for the Goshen College Bulletin by Don Yost ’72, chief storyteller at Maple City Health Care Center. Check out the center’s website, a collection of stories about the attitudes, processes and innovations that foster healthy community.