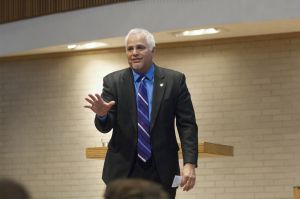 When TEDtalks, people listen! And I’m not talking about Ted, the brash, crude lovable man-bear teddy bear who came to life in the comedy “ted” — who sits on the couch and talks incessantly and crudely with his best friend since childhood, John, who is a devil-may-care cannabis-smoking-human-dude from Boston. Not teddy-bear, Ted.

I’m talking about (capital) T-E-Dtalks, the mega-online-video-lecture series that has been viewed now, well-over 2 billion times. Originally, TEDtalks were just about Technology, Entertainment, and Design, but have morphed into almost every conceivable topic of interest. Today, you can go online and listen to some 1700 talks, now translated into over 100 languages. TEDtalks has been so successful that now you can even upload web parodies called “Onion Talks,” with such titles as “What is the Biggest Rock?” and “Ducks go Quack and Chickens go Cluck,” and a series of DEDtalks, which are TEDtalks by Zombies.

The idea behind TEDtalks, according to the website, is that “good ideas are worth spreading; that good ideas, shared passionately, have the power to change attitudes, minds, lives, and the world for the better.” Not surprisingly, perhaps, the man who helped make TEDtalks so popular, the current CEO, Chris Anderson, is the son of British medical missionaries. Mr. Anderson grew up in Afghanistan, India and Pakistan and is clearly an evangelist for good ideas. (NYTimes, Sun., 03.09.14).

TEDtalks is a remarkable resource for learning some of the most fascinating ideas by some of the world’s most distinguished leaders in every discipline imaginable. You can learn about: “the mathematics behind all drum beats,” “how schools kill creativity,” “the surprising science of happiness,” “the power of introverts,” “the life-saving immune-protecting power of poo,” and, of course, the now most famous commencement speech ever, Steve Jobs’ “How to live before you die.”

If I were to give a TEDtalk, it might be titled something like, “Why my Christian Instinct Favors Religionless People.” (Bonhoeffer). Let me be blunt. Sometimes I trust the skepticism of the scientific method to reveal the truth about reality and life more than many a Christian claim about truth.

The faith of most scientists in the basic truthfulness of nature – i.e., that nature has no reason to lie to us –- is truly inspiring to me. All scientists, worthy of the name, have a modesty that I sometimes wish more non-scientist Christians and others would emulate. Of course, there are plenty of arrogant know-it-all-scientists as well, but they are often the ones who draw metaphysical conclusions outside the confines of their discipline — where they can be no more authoritative than a theologian or philosopher, who discover truth by other means. Others, of course, like all humans, are just plain arrogant. What’s new.

But I do love the inherent modesty of the scientific method, which by definition is a self-correcting discipline: you observe nature or phenomenon around you; you develop a hypothesis; you test the hypothesis; you draw a conclusion. In the end, you support a theory’s predictions that are confirmed by observation and you challenge a theory when its predictions don’t pan out. As a religion-natural science-biology interdisciplinary graduate of GC, I really like that.

For example, for many years, scientists thought that reality, the universe and all that was in it, existed in a steady-state. Matter was thought to be finite in infinite flux, a theory backed-up by Einstein’s assumptions and mathematical calculations. Then in 1929, the astronomer Edwin Hubble observed that distant galaxies were moving away from us and that the farther away they got, the faster they seemed to be receding implying a scattering of matter to the winds. If you rewound this forward motion of the universe, like an old movie reel, you would come to a point when the universe began, which was then called The Big Bang, for lack of a better term.

This wonderful discovery led Einstein to admit that his earlier assumptions about the steady-state universe was the biggest mistake of his life. Happy Birthday, Einstein! (Today is his birthday). Now, you tell me, who do you know of such renown, such prominence, such intellectual power, who would ever admit to having made such a colossal error? In all my reading in theology and philosophy and constructivist social and literary theory, in all my reading of biographies of famous theologians or social critics or philosophers, I have rarely, if ever, encountered anyone who would admit to such a mistake in their theories or beliefs or doctrinal conclusions. Can you imagine Nietzsche, or Derrida, or Foucault or Dawkins (“New Atheists) ever admitting that just maybe their basic assumptions about life or ways of knowing or conclusions were just plain wrong? Not to be too hard on them, neither would many Christians dare admit the same about their pet doctrine, interpretation of life or Scripture or ideological point of view. We Christians tend to call such stubborn belief, “unwavering conviction” or “true discipleship.” Where is our modesty when it comes to our own faith convictions? You tell me.

I love the basic trust in the truth-telling power of creation that the Psalmist has (Ps.19): “The heavens declare the glory of God, and the firmament declares God’s handiwork.” Or in like manner, the Apostle Paul (Rom 1:19-20) writes that creation reveals the eternal power and mystery of God. I bet if you asked any one of our professors in the science department they would probably say something very similar when they look through a microscope and see the beautiful structure of a tiny cell or peer into the night sky with a telescope to see the vast swirling tail of the milky-way.

If I were to leave you with any idea to ponder, I would recommend the ancient truism that says, “all truth is God’s truth.” Let’s be a bit more trusting of what God might be telling us in nature around and above and inside us. It is o.k. to be skeptical about any and all interpretations, whether of nature or texts because we are humans, not God. Yes, we are prone to getting things wrong, but we are also capable of making things right, if we admit our mistakes, learn from them, and try again.

I confess, I’m a bit frustrated that TEDtalks gives Christianity a ‘bad wrap’ overall. Tedtalks aggravates the cultural stereotype that Christianity is really NOT one of the “great ideas” worth spreading, too far. And this, from a missionary kid overseeing the whole enterprise. There are only three lectures under the heading “Christianity.” Three. One by Billy Graham. One by Rick Warren. And one by comedian Julia Sweeney. Hers is a one-woman show entitled, “Letting Go of God.” It’s funny, poignant, and sad for me, because it’s her story of her journey away from Christianity to atheism.

I do understand the reason behind the negative stereotype, however, because it’s true that so many Christian believers are often times pre-Copernican in their attitudes about the truth-telling power of nature (“natural revelation”). The stereotype of Christianity as a “bad idea” has been in formation a long, long time. From the time Copernicus first published his book entitled, On the Revolutions of the Celestial Spheres (1553) about a sun-centered solar system and later when Galileo was excommunicated from the church for espousing the Copernican Revolution, bad-blood has been festering between religion and “science” (or the scientific world-view) ever since.

We might ask ourselves, do we really imagine that God would create the world in such a way that creation would deliberately and ultimately mislead scientists and other truth-seekers into making false claims about the truth they find there by trial and error? Why would God be so sneaky, so deceptive, especially when it appears God led the Psalmist and Apostle Paul to say, creation has a definite role in leading people to God? Should Christians not welcome truths honed under the self-correcting microscope of modern science be it about the earth’s age, or climate change, or the structure of DNA, or the slow process of emergent life, or the healing properties of vitamin C?

Scripture, which by the way, also has within it its own self-correcting mechanism (texts and counter-texts) tells us that Moses was educated “in all the learning of the Egyptians.” The four Jewish students, Daniel, Shadrach, Meshach and Abednigo “gained knowledge and understanding of all kinds of literature and learning,” in Nebuchadnezzar’s Babylon. The very essence of wisdom in the Bible tended to collapse what we have separated, namely religious and nonreligious learning. Solomon was a great empiricist who listed all the flora and fauna of his day in one grand Phylum Chart; and collected some 3000 proverbs from all over the known world. Wisdom, knowledge, learning was part of God’s divine world even before the first act of creation, so the wisdom hymn tells it (Prov. 8). In short, Scripture repeatedly underscores the idea that the “Spirit of truth will lead us into all truth,” period.

And not just Scripture, St. Augustine, one of the great theologians of the first millennium, summarizes the comprehensive nature of truth-seeking this way: “Let every good and true Christian understand that wherever truth may be found, it belongs to his Master…” (On Christian Doctrine, II.18). Wherever truth be found, whether revealed or discovered it is from God. Apostle Paul said as much, too: “Whatever is true, right, lovely, admirable, and noble, think about these things.” In other words, as my mother used to say to me quite often, “James, God gave you a good mind, so use it.” Isn’t that awesomely good news: that our thoughtful minds are so blessed by God. Truly, a good idea worth spreading.

Christianity needs such “high thinkers!” (Erwin McManus) Christianity needs men and women willing and able to discern truth wherever it is found. And where better ought we find such “high thinkers” than in Christian higher education? If a Christian university settles for anything less than a comprehensive quest for truth as discovered in all disciplines, it is less a Christian university by the very standards of Holy Scripture.

Science cannot resolve the metaphysical questions of the reason for the existence of the universe, nor the reasons for the existence of any physical laws at all, nor the reasons for why we exist at all, nor a myriad of other boundary questions beyond the scope of scientific inquiry. (Nancey Murphy). That, too, is a truism, one that scientists worthy of their craft and modest in their claims will confess to; or should do so in remaining true to their discipline. Though many, of course, do not. But that’s a conversation for another day. I just don’t want any budding atheists out there to be dumb atheists, any more than I like non-thinking believers. I implore you, do your homework before becoming a dogmatic disciple of any world-view, please.

Finally, let us remind ourselves that at Goshen College, a Christ-centered college of high thinkers, we claim the compassionate peacemaking as a core value. So let’s do our best to make peace between the age-old schism of science and religion. To do so, would be, TEDtalks-terms, an idea worth spreading far and wide!