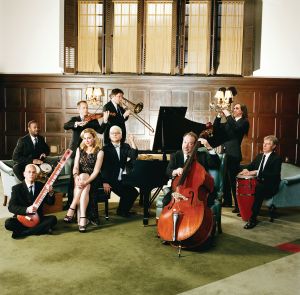 The upbeat sounds of the Pink Martini orchestra will be heard in Goshen on Friday, March 14, at 7:30 p.m. for a Performing Art Series concert in the Goshen College Music Center’s Sauder Concert Hall.

Since bursting onto the scene in 1997 with the jazzy album “Sympathique,” this Oregon-based “little orchestra” has gained a national following with an upbeat multilingual repertoire of classical, Latin, jazz, pop and big band music. Led by pianist Thomas Lauderdale, the band has performed with more than 50 orchestras and collaborated with such artists as Rufus Wainwright, Carol Channing, Saori Yuki and the cast of Sesame Street.

THIS CONCERT IS SOLD OUT. For more information or to be placed on a waiting list, contact the Goshen College Welcome Center by calling (574) 535-7566, or emailing welcomecenter@goshen.edu.

Seating for those with disabilities is available.