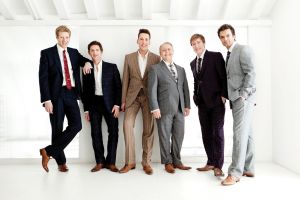 The world-renowned British a cappella group, the King’s Singers, will return to Goshen College Music Center’s Sauder Concert Hall on Friday, Jan. 31 at 7:30 p.m. as part of the college’s Performing Arts Series.

Instantly recognizable for their spot-on intonation, impeccable vocal blend, flawless articulation and incisive timing, the Grammy Award-winning a cappella vocal ensemble will return to Goshen College for the first time since their 2006 Performing Arts Series concert.

Having sung and toured the world for 41 years and compiled a discography of more than 150 recordings, the King’s Singers are consummate entertainers, charming audiences with a delightful British wit along with their stunning vocal performance.

Very few tickets remain for this performance. Tickets are on sale for $44, $40, $28 and are available through the Goshen College Welcome Center by calling (574) 535-7566, or emailing welcomecenter@goshen.edu.