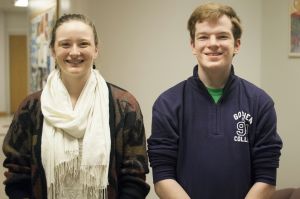 Rhianna Cockrell, a junior music major from Rileyville, Va., and Ben Ganger, a sophomore music major from Goshen, each won first place in their divisions at the annual National Association of Teachers of Singing (NATS) Indiana state competition. It is the first time in recent memory that two Goshen College students have finished as division winners in the same year. Ganger, a baritone, and Cockrell, a mezzo soprano, both study with GC associate professor of music Dr. Scott Hochstetler.

“We’re so proud of Ben and Rhianna for their hard work and commitment to vocal artistry,” said Hochstetler. “Their success is a reflection of the high level of music-making happening at Goshen College.”