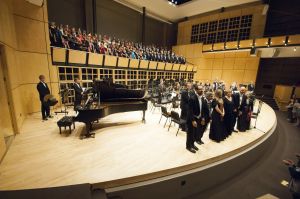 The Goshen College choirs will be joined by the Goshen High School Advanced Crimson Choir, as well as special soloists, community members and a children’s choir in a performance of Carl Orff’s celebrated cantata “Carmina Burana” on Saturday, Nov. 9. The concert will begin at 7:30 p.m. in the Goshen College Music Center’s Sauder Concert Hall. The performance is conducted by Scott Hochstetler, associate professor of music at Goshen College.

Carmina Burana, one of the most celebrated works of 20th century music, is a secular cantata composed by Orff in 1936 based on Latin and Germanic texts from the 11th through 13th centuries. The music of its opening and concluding movements, “O Fortuna,” has been depicted in numerous films and television programs, and is one of the more immediately recognizable pieces of 20th century music.

This performance, arranged for choirs, soloists, mixed percussion and two pianos, will also feature Rejoice Choir, a children’s choir for grades 3-5 directed by Kristin Kauffman; the Goshen College percussion ensemble, directed by Christopher Fashun, assistant professor of music; pianists Christine Larson Seitz and Chara Sonntag; and soloists Jennifer Larson, soprano, James Judd, tenor, and Stephen Swanson, baritone. There will be imagery projected on the stage during the concert, created and run by Goshen College art professor Randy Horst, and the concert will be interpreted in American Sign Language (ASL) by members of the Goshen College ASL Department, coordinated by ASL professor Colleen Geier.

The concert will open with a performance by the Model School Orff Ensemble, directed by local music educator Kent Dutchersmith, which will illustrate the influential “Orff-Schulwerk” method of music education pioneered by Carl Orff.