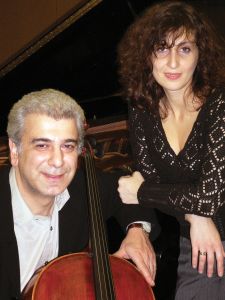 Cost: Free and open to the public

Formerly from the Republic of Georgia, husband and wife musical duo David Machavariani and Ketevan Badridze will perform great music of German and Russian major composers, including sonatas by Richard Strauss and Dmitry Shostakovich, for Goshen College’s December Afternoon Sabbatical. The free pre-Christmas concert will take place on Tuesday, Dec. 11 at 1 p.m. in the Goshen College Music Center’s Sauder Concert Hall. It is open to the public.

Machavariani teaches cello at Goshen College and Badridze is on the piano faculty at Indiana University South Bend.

Machavariani was born in Tbilisi, Republic of Georgia. His official musical training started at the age of 8 in a special music school for gifted children. He debuted at the age of 14 with the Georgian National Symphony, performing Haydn’s Concerto in C major. He continued his studies at the Tbilisi State Conservatory under the tutelage of Eldar Isakadze and Tamara Gabarashvili (both pupils of Mstislav Rostropovich), and earned his master’s degree with highest distinction. During these years, Machavariani played numerous recitals as a soloist and chamber musician and won first prize at the Transcaucasian chamber music competition.

In 1992, by invitation of Indiana University South Bend, Machavariani came to the United States and earned his master’s degree and artist diploma. He also studied at University of Notre Dame with Karen Buranskas. As a soloist he played many times with a Georgian National Symphony, Georgian Radio and TV Orchestra, IUSB Philharmonic and Elkhart Symphony Orchestra. He successfully has toured in Georgia, Russia and Ukraine. He was member of Georgian Chamber Orchestra under Liana Isakadze touring in Czechoslovakia, Yugoslavia, Hungary, West Germany and Austria. He was principal cello in the Elkhart Symphony Orchestra and Pro Musica Chamber Orchestra in St. Joseph, Mich. Currently Machavariani is a member of South Bend Symphony Orchestra and Columbia (Mo.) Festival Chamber Orchestra, also member of Endless Mountain Music Festival Orchestra in Wellsboro (Pa.).

In 2001, Machavariani began serving as an adjunct faculty at Goshen College, and since 2006 he is adjunct instructor in music at Valparaiso University. From 2002-04, he has served in this capacity at Indiana University South Bend.

Badridze was born in Tbilisi, Republic of Georgia. She began piano studies at the Georgian Special Music School and continued her studies at the Tbilisi State Conservatory. In 1993, upon completion of her postgraduate degree, she was appointed to the piano faculty.

Since her first performance on stage with an orchestra at the age of 12, Ketevan has appeared with the Tbilisi Symphony and Chamber Orchestra, the Erevan Philharmonic Orchestra and BBC Welsh Symphony Orchestra. She was a frequent performer of solo and chamber music in Georgia, France, Belgium, Austria, Italy and Germany.

In 2000 she moved to the United States to study with Professor Alexander Toradze, and has appeared with the Toradze Piano Studio at the numerous music venues both in Europe and the United States. She has also been a major prizewinner of numerous international piano competitions.