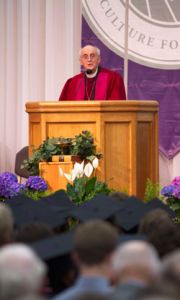 GOSHEN, Ind. — Goshen College’s Class of 2012 received degrees on Sunday, April 22 after being encouraged to become “ambassadors of reconciliation” and to experience the healing and fulfillment possible through a personal relationship with Jesus Christ.

At a morning baccalaureate worship service in the college’s Church-Chapel, President James E. Brenneman delivered a sermon titled “Five-Core Diplomats,” based on 2 Corinthians 5:16-20, in which the Apostle Paul encouraged believers to regard themselves as part of a new creation and ambassadors of reconciliation.

Brenneman told the graduates that over the past fours years they had experienced tumultuous times, including two wars, rapid cultural and technological changes, a stock market crash, the second worst recession in U.S. history, a divisive presidential election and a breakdown in the nation’s civil discourse.

“In times like these, various fears and paranoia are nourished in the extreme by prophets on all sides of the ideological spectrum, exacerbated by the likes of Rush Limbaugh on one side and Bill Maher on the other,” he said. “Today, even our churches, for heaven’s sake, while less segregated by race than when I went to college, are more segregated by political ideology and political party than ever before.”

Amid such contentiousness, Brenneman said he was pleased that students selected 2 Corinthians 5:16-20 as their worship Scripture, because of its call for people to become “ambassadors of Christ, diplomats of hope and ambassadors of reconciliation.”

“In the closing days of our lives together here on this campus, our sending Scripture reminds us that we are called to be God’s representatives on earth as in heavenÉ ambassadors of reconciliation — the bringing of former enemies together, uniting friends and foes alike. How radical is that? Profoundly so,” Brenneman said. “There is no greater vocation on earth, no more timely calling than to be an ambassador of Christ, an ambassador of reconciliation.”

In his Sermon on the Mount, Jesus Christ called on his followers to befriend foes, Brenneman said, adding that it remains a great challenge for Christians to befriend those with whom they have profound disagreements.

Still, Brenneman said Christians could do this. He pointed to the example of the Rev. Zoughbi Zoughbi, founder and director of Wi’am, the Palestinian Conflict Resolution Center in Bethlehem, and father of Marcelle Al-Zoughbi, a junior at Goshen College.

“In the greatest of ironies, in the birthplace of Jesus, the little town of Bethlehem, a 30-foot high dividing wall between Israel and Palestine literally passes right along the property line of the center, with a machine-gun laden watch-tower looking down on to the garden of the center,” Brenneman said. “Zoughbi has spent a lifetime in ‘citizen-diplomacy,’ working to break down walls of separation between people – especially between Jews, Christians and Muslims —who claim a common God through their common ancestor, Abraham, but are now locked in and traumatized by violent confrontation.”

Although Brenneman conceded that it is difficult to be an ambassador and a reconciler in a world torn by division and demonization, he said that many Goshen College graduates have demonstrated the ability to befriend those with significant differences and to model gracious love.

“As you depart, may you leave as diplomats, ambassadors of a life-changing story – hopefully learned and reinforced throughout your years here – a story shaped by the five core values of which you are now so familiar: to be compassionate peacemakers, passionate learners, servant leaders, global citizens, centered in the life and teachings of Christ.”

Brenneman closed his sermon with a final wish: “Would that you find that friend, who is so different from you, that the opportunity to be an ambassador of reconciliation is truly an opportunity of a lifetime É such that your lives manifest the Kingdom of God on earth as it is in heaven and healing and hope would come to this broken world little by little, peace by peace.”

Brenneman welcomed a crowd of about 2,000 people gathered for the ceremony by recalling the many hardships, joys and tears over the past four years.

“Our journey together has been filled with lots of hard work, late nights, deep learning, joyful memories, 100,000 questions, and some helpful guidance, we pray, along the way,” he said. “We shared lots of fun, some pranks, loads of goodwill, times of profound sorrow and even a few severe mercies.”

Speaking for the faculty and staff as well, Brenneman shared that he continues to grieve the loss of Professor of Biology James S. Miller, 58, who was killed during a home invasion robbery at his Goshen home on Oct. 9, 2011. Brenneman led the audience in observing a moment of silence for Professor Miller, whose name and photo appeared in the printed commencement program.

After an invocation and the hymn, “I sing the mighty power of God,” Brenneman introduced the commencement speaker — Bishop Simon Barrington-Ward, the Bishop of Coventry, in England, from 1985 to 1997.

Barrington-Ward, who has been a regular speaker for Goshen College’s Arts in London May term course, received a bachelor’s and master’s degree from Magdalene College, University of Cambridge, where he later served as chaplain and dean. He served as Bishop of Coventry from 1985 to 1997 and currently is a bishop with pastoral care of the University of Cambridge. In 2001, he was appointed Knight Commander of the Most Distinguished Order of St. Michael and St. George by Queen Elizabeth.

In his commencement address, “Becoming What You Are: Exploring the Great Exchange,” Barrington-Ward talked about two personal discoveries — God’s meaning in the person of Jesus Christ and a simple prayer from the earliest days of Christianity. He called the interplay between the discoveries as two parts of an “exchange” between God and humanity arrived at through Jesus Christ.

When he was a young man teaching in Germany, Barrington-Ward said he was moved by a sermon in which the pastor described the “sweet exchange” of God becoming human in the person of Jesus Christ, accepting the depths of humanity and offering the hope of a final transformation as a new creation.

“All human experiences or glimpses of God or of the divine of all the faiths and philosophies that exist are really supported by this one happening,” Barrington-Ward said. “The reality of God, the divine eternal Spirit, whom many seek, is here universally confirmed as having entered into this new relationship with humankind.”

Much later in life, Barrington-Ward said he sought help because he was having difficulty praying. He found a solution — a one-sentence prayer constantly repeated — at a Russian Eastern Orthodox monastery. That is where he first heard the Jesus Prayer: “Lord Jesus Christ, Son of God, have mercy on me, a sinner.”

Barrington-Ward said listening to constant recitations of the Jesus Prayer transformed his faith by giving him a way to more fully connect to God and to reduce distractions.

Barrington-Ward closed his speech by hoping that the graduates and all others might find help “exploring more of the infinite resources which have been made available to us in the person of God in Christ, through the Spirit, and of the unsearchable riches of that ‘great exchange’ which are still open for us, to draw upon more and more deeply, as we grow ever more fully into union in the Spirit through Christ with God.”

After Barrington-Ward’s address, Ken Pletcher was honored for his diverse service to the college over three decades. Before working as a major gift officer for the last five years, Pletcher served for seven years as athletic director and for 10 years in a number of capacities, including as a teacher, coach, intramural sports director and in admissions positions.

The graduates on hand Sunday then received their degrees and signed their names in the Goshen College historical book – a tradition linking them to generations of alumni.

After the degrees were conferred, the graduates, the faculty and the audience joined in the singing of the Goshen College Alma Mater.

Also taking part in commencement were two parents of graduating seniors: Marcia Yoder-Schrock, the mother of Isaac Yoder-Schrock, both of Donnellson, Iowa, who offered the invocation, and Ritch Hochstetler, the father of Austin Hochstetler of Goshen, who gave the benediction.

After the benediction, faculty and administrators lined the main corridor of the Recreation-Fitness Center and applauded the departing seniors. The “applause tunnel” tradition also takes place at the beginning of each academic year to welcome students back to campus.

Represented in this year’s graduating class were students from 25 states, including 115 from Indiana, and from 11 countries.

The class included 21 graduates with double majors. Twenty-three students graduated with highest honors – grade point averages of 3.9 to a perfect 4.0. In addition, 67 others were on track to achieve GPAs of 3.60 and above.

Of the graduates, 123 took the Graduation Pledge of Social and Environmental Responsibility, a national program at more than 100 colleges and universities. By signing the pledge, the graduates promised to “explore and take into account the social and environmental consequences of any job I consider and will try to improve these aspects of any organizations for which I work.”

The service formally began with a welcome from Jessica Camacho, a nursing major from Goshen, followed by a congregational hymn, “Here in this place,” led by Jay Mast, a theater/music major from Goshen. Senior reflections were offered by Hannah Epp, a peace, justice and conflict studies major from Henderson, Neb., Daisy Gaspar, an elementary education/special education major from Goshen, Anna Ruth, an English major from Harleysville, Pa., and Isaac Yoder-Schrock, a physics major from Donnellson, Iowa.

After singing the hymn, “We are the people of God’s peace,” there was the reading of a Scripture litany, based on 2 Corinthians 5:16-20, written by graduate Stephanie Hollenberg. The litany was read by sisters Alyssa Goodman, a nursing major, and Lindsay Goodman, an American Sign Language major, both from Nappanee.

After President Brenneman’s sermon, a senior vocal ensemble — made up of 19 graduates — sang “Yesu Ninakupenda,” which means “Jesus I love you, you are my friend, I will serve you, throughout my life.”

After the benediction, the baccalaureate services concluding with the sending song, “Wake up Everybody,” by John Legend and the Roots, performed by eight seniors.

Other events during the busy weekend at Goshen College included a senior program, which showcased the artistic, comedic and musical talent of the Class of 2012, a senior art exhibit, academic department receptions for graduates and their families, a reception for adult programs and an evening reception hosted by President Brenneman and his wife, Dr. Terri J. Plank Brenneman.