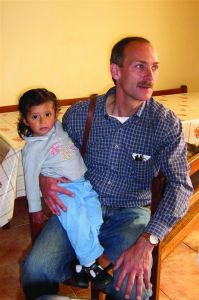 The official understanding was that Goshen College was sending my family and me to Peru for one year as faculty directors of the Study-Service Term (SST) program based in Lima. In some respects, though, the college was simply allowing a professor to finish a 28-year-old “incomplete.”

Back in 1979, at the end of my sophomore year at Goshen, I went to Costa Rica on SST. The time went too quickly, and my anxiety over being in a foreign country often ran too high. Although I earned full academic credit, I returned to the United States thinking I had failed to take advantage of this great opportunity: to learn Spanish, to develop friendships, to embrace the Latino culture. Peru closed the circle, as I had the chance to experience not just one additional semester of SST, but three. While there I wrote a blog called “Hoosier Prof in Peru.” An early entry shows a newcomer trying to find his footing:As classes get underway in Goshen, I find myself grateful to be here in this place where I am a student first, and a professor second. Surprisingly, there’s satisfaction in feeling out of control, in not having answers at the ready, in not knowing how to do things, in not knowing what to say. The other day our doorman was totally flummoxed when I said, “Que tiempo hace?” which is standard textbook Spanish for “How’s the weather?” I blamed my poor accent until I learned that in Peru, one simply asks, “Como esta el clima?”

When we set aside our own competencies, or assumed competencies, Henri Nouwen writes, we get in touch with a part of ourselves that is usually hidden by defenses. We become like children again. We’re free to ask questions. We admit mistakes. We see how much we have in common with others, instead of what we can hold above them. We discover anew, he says, “our vocation to live graceful lives.”

If the question is, “What did you learn?” – the best answer might be a little about a lot. A dear friend and one of our Spanish instructors in Peru, Oswaldo Aguirre, recently sent me a book entitled 101 Reasons to Be Proud of Peru (Machu Picchu is there to be sure, but so also is the potato and Caral, the oldest city in the Americas). The book is a sampler, not unlike the experience of an SST leader hurrying around Lima (indigenous ruins today, a museum visit tomorrow) during the study weeks and then riding buses into the highlands, along the desert coast and down into the jungle, on service visits.

If the question is, “What did you gain?” – the best answer might be friendships, and not just with Peruvians. On my office door this year I have photos of our three SST groups, 63 students in all, under the heading: “Hijas y Hijos, 2007-2008, Que viva el Peru!” Each face on these photos of our adopted daughters and sons triggers singular memories: singing to a tearful woman lying on a hospice bed, clearing rubble from a collapsed house, reading a Spanish-language Bible by candlelight on a coffee farm, performing an Andean dance.

The Institute of International Education’s 2008 report on study abroad puts Goshen College among the top schools in the country for participation: Goshen ranked No. 13, with 82.5 percent of students studying abroad at some point in their college careers. Since the launching of SST as a pioneer venture in 1968, more than 7,000 students and 230 leaders have traveled through the program.

The unique blend of cultural education and service-learning still inspires. In my final blog entry, written hours before we left Lima, I mention the book Encore: Finding Work that Matters in the Second Half of Life. The author, Marc Freedman, describes what is being recognized as a new life stage: the 10 or 20 or more years after the end of one’s primary career and before bed rest. Baby Boomers increasingly want to make a contribution, given their economic resources, life skills and deep circle of social contacts.

If Goshen College developed an SST program for older adults, a program that would include language learning, field trips and lectures, along with service assignments in cities across the country, all the while living with host families, would people sign up? I’ll bet they would. I know I’d like the chance to earn an advanced degree in SST.