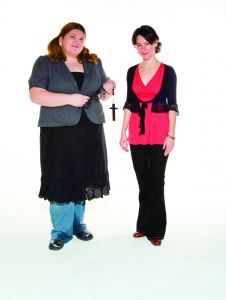 Last fall, Goshen College student Deanne Binde performed as the lead in the college’s fall mainstage play, “Step on a Crack.” This fall, her very good friend Angie Noah performed as Binde in the fall mainstage play.
After Binde’s life was cut tragically short in May 2008 when she died in a car crash while driving home to Minnesota, her death touched off a reaction that culminated in the world premiere of a play written especially for her.

“The Saint Plays” by Erik Ehn are a series of short plays that link saints from the past with ordinary people, and six of them were performed by the Goshen College Theater Department Oct. 31-Nov. 9.
Exploring the connectedness between historical saints, contemporary life, earthly existence, spirit and eternity, “The Saint Plays” were about Joan of Arc, John the Baptist, St. Eulalia and St. George who fought a dragon. In addition, Ehn wrote a special piece about St. Rose of Viterbo, one of the two saints that mark Binde’s birthdate.

Binde, a junior Roman Catholic student, touched the lives of many people on campus during her years as a communication and theater major. After her death, Milne, who had taught and directed Binde, decided to stage “The Saint Plays,” by Ehn, a Catholic award-winning, internationally-renowned playwright who has previously explored theatrical responses to the genocide in Rwanda and works to promote peace building through the arts.

Though Ehn, dean of the theater program at the California Institute of the Arts, did not know Binde and hadn’t written a play about the saint connected with Binde’s birthdate, he quickly offered to write a piece about Rose of Viterbo and Binde’s life when Milne contacted him. In the play, Ehn included stories about Binde and quotes by her.
While honoring Binde through theater, her former director and fellow cast mates found new challenges. “Working on this play written for Deanne has been difficult. How do you cast for a play about someone you know, with people who were her friends?” said Milne. “I think Deanne would have loved this play and this process though. And without her and her spirit, this wouldn’t have been possible. There are many times when we are on the stage working and I can feel and know that Deanne is still here with us.”

The way that this production came together is quite different than other mainstage productions at Goshen College. “We have been working in an incredibly ensemble-based way, with the students all pulling double or even triple duty,” said Milne. “This approach resonates with our liberal arts background, as it asks students to work in teams to design the set or create movement or even choose which specific short plays we will do. They are working between disciplines and their work has been incredible.”