Faculty recital series to feature flutist Rebecca Hovan and pianist Christine Seitz Jan. 20 with music from around the world

GOSHEN, Ind. – Flutist Rebecca Hovan and pianist Christine Larson Seitz, assistant professor of music at Goshen College, will perform music from around the world in their recital as part of the 2005-06 Goshen College Faculty Recital Series on Jan. 20 at 7:30 p.m. in Goshen College Music Center’s Rieth Recital Hall.

With a theme of “Music of the Nations,” the recital will include selections that are either authentic folk songs or which evoke the style and flavor of various countries/cultures around the world, including Russia, Romania, Japan, Wales, Latin America, Native America (Hopi Indians) and India. The music will also feature various members of the flute family – piccolo, regular C flute and alto flute. 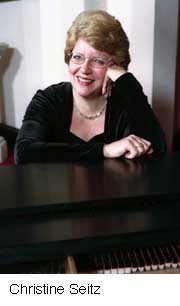 Hovan is chair of the pedagogy committee of the National Flute Association (NFA) and serves on the faculty at Indiana University South Bend and at Goshen College. She is co-author of the book “Blocki Flute Method Book II,” an intermediate method for flute published in 2003, and recently completed the second edition of that work in August 2005. As a performer, she appears regularly in recital and with various chamber groups and orchestras in the Northern Indiana area. She has performed at several NFA convention programs. She is also an artist/clinician for Emerson Flutes. Hovan received a master’s degree of music from the University of North Texas, where she was a teaching fellow and studied with Mary KarenClardy. She won the NFA master class competition and has presented various pedagogy workshops for that organization as well as at colleges and universities and flute festivals. Her recent activities include the preparation of two new publications, the teacher’s manual to accompany “Blocki Flute Method Book II, 2nd edition,” to be released in 2006, and a collection of duets compiled, arranged and composed by Hovan and Kathryn Blocki, also to be released in 2006.

Seitz has served as assistant professor of music at Goshen College since 1999, where she teaches music technology and music theory courses and serves as staff accompanist. Previously an instructor at Indiana University South Bend and Bethel College (Mishawaka, Ind.), she has been a sought-after recital accompanist in Michiana for 35 years. She earned a bachelor’s degree in piano performance and a master’s degree in studio accompanying from Indiana University South Bend, studying with Robert Hamilton and John Owings. Since 1978, Seitz has been the accompanist and assistant director for the St. Joseph Valley Camerata. She has served as the organist at First United Methodist Church in Mishawaka since 1987.

Tickets are $6 for adults, $4 for seniors and students. GC students receive free admission with ID. Tickets can be purchased at the door.