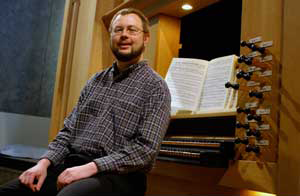 Lehman’s research is available in full detail in the February and May 2005 issues of “Early Music,” a journal published by Oxford University Press. He is now recording a CD of organ music on Goshen College’s newly installed pipe organ, to be dedicated May 1, which is tuned with the “Bach/Lehman 1722” temperament.

Lehman, who now resides in Dayton, Va., was primed to unlock the puzzle of Bach’s keyboard tuning – a classic problem in music research related to Bach for the past century – as he majored in mathematics and music. He would need both, and would also draw on his three graduate degrees from the University of Michigan to understand the music theory problem as well as envision a solution.

The puzzle Bach unknowingly left to be solved involves a tuning method, or temperament. Essentially, the practical challenge for keyboard musicians over the past several hundred years in performing particularly Bach’s music has been both a mathematical and a musically artistic one. The whole and half notes in a scale, and the thirds and fifths of chords, cannot all be made to fit into an octave in exactly the proportions that physics and geometry would suggest are appropriate. So, tuners have had to make careful adjustments and de-tune some of the notes, coming up with tasteful compromises. The methods used to determine these compromises are called “temperaments” – and there are hundreds of them. Depending on how many sharps and flats are used, some temperaments may sound “sweeter and gentler” than others, Lehman said.

Today, most musicians and tuners use equal temperament, which places all the notes in a scale at exactly the same distance apart in pitch in order to resolve the differences. That is the norm on pianos and most organs, but it creates as many musical problems as it proposes to solve, Lehman said.

“The disadvantage of equal tuning is that it’s tricky to set up, and it’s relatively boring to listen to. Some of the notes are far out of tune due to this particular compromise, and the overall resonance of the instruments is reduced,” Lehman said. “People 300 years ago knew about equal tuning as an option. But most purposefully did not use it because they didn’t like the resulting lack of interesting variety” in how their music sounded, he continued.

Historians and musicians had long concluded that if Bach held a preference for a tuning other than equal temperament, he did not note it or no one knew about it. But historical accounts suggest that Bach could tune a harpsichord in a speedy 15 minutes, suggesting to Lehman, who tunes harpsichords himself, that the composer must have used a temperament that was simpler and quicker to set up than equal tuning. 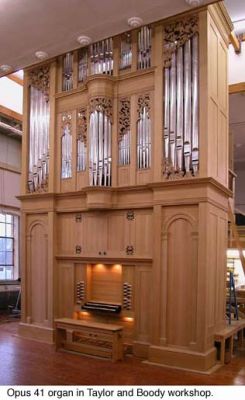 For Lehman, and thousands of other keyboard musicians, the need has persisted to discover a method of tuning that would work equally well – and yet differently – for all scales and chords. “None of the tunings I had studied and tried on the harpsichord worked right for all of Bach’s music. And the reference books said it couldn’t be figured out, or else somebody would have done it already,” he said. “But music shouldn’t sound either boring or randomly out of tune! It doesn’t make much sense that Bach would write music that sounds bad, on purpose.”

For 250 years, hand-drawn loops that appeared atop the title page of Bach’s 1722 “Well-Tempered Clavier” – seemingly mere decoration – offered a key to the secret of a preferred tuning, but its subtlety disguised its solution to the puzzle. The flourish was not even considered as a link to Bach’s temperament, according to Lehman. “During my lifetime, this particular piece of evidence has been officially meaningless, according to the Bach research institutes,” he said. “It’s little wonder, then, that few have paid attention to it.”

Then in March 2004, Lehman received an e-mail message from British harpsichord and clavichord enthusiast David Hitchin who reported that two German researchers suggested that the drawing might be a clue to a temperament. But Lehman felt the temperament that the Germans were proposing didn’t make sense; some of its premises were clearly incorrect.

“Then it hit me: Bach’s diagram does describe his temperament and merely needed to be interpreted correctly,” Lehman said. “Bach wrote down the math of his tuning method here in a simple way, not by a chart of numbers, but by drawing a picture of it. This picture tells us exactly how the tuning should be set up, unequally, so the music in that book and his other books sounds best.”

Interestingly, Bach, unlike Lehman, hated math, and was poor at writing and spelling. Being a musical genius, Bach knew what temperament sounded most pleasing, but instead of recording an explanation, he simply jotted down a practical description of his preferred temperament. He wrote this in what was, to him, a very logical place: in a book about tuning that was part of the 37-year-old’s set of teaching materials.

Bach turned his book upside-down to draw the diagram so that when viewed right side up, it appeared in reverse. “The different types of shapes in Bach’s drawing tell the tuner how to make the specific notes almost in tune together, but slightly out of tune by a little amount, on purpose. This drawing is Bach’s recipe to set up all 12 of the notes exactly right. I believe that he was hiding a family secret, by writing it upside down and making it appear unimportant,” Lehman said.

As soon as Lehman translated Bach’s 1722 drawing and tuned his own harpsichord according to Bach’s lesson on paper, “the way it sounded, so beautiful and unexpected, made me cry. I knew I was on to something big.”

Lehman then began playing through all of Bach’s keyboard music “to see what might pop out from Bach’s pattern of intonation,” he said. “To understand all this, it is crucial to do extensive listening and experimentation. This specific layout of adjusted intervals does some amazing things not only within the keyboard and organ music, but also in Bach’s vocal music.”

As those with even a trained ear will describe, the difference this tuning makes can be quite subtle, though it is at times quite obvious – much like the design Bach drew to explain the temperament. This tuning influenced Bach’s composing as well as his performance of his music, according to Lehman. “The correct tuning according to Bach’s expectations reveals a lost layer of his art. It makes the spiritual content of his music more easily perceptible and measurable.”

Solving Bach’s temperament puzzle has unleashed a new chapter in music for Lehman. “I feel as if I have had the best single music lesson of my entire life, and that it’s happened at Bach’s house.”

Upon translating the details necessary to tune keyboards accordingly, Lehman began testing his findings with others in the field. The resulting temperament has already been implemented in music performed in concert tours by Apollo’s Fire and The English Concert; in broadcasts on the BBC and Swiss radio; and in performances in London’s Wigmore Hall, New York’s Lincoln Center and in Amsterdam’s Concertgebouw.

Last summer, Lehman approached Taylor & Boody Organbuilders of Staunton, Va., with an explanation of the temperament, inquiring about the possibility of Bach’s temperament being built into Goshen College’s new organ, Opus 41. Taylor & Boody tested the results for several months during a study of organ building by Bach’s own associate, Zacharias Hildebrandt; this brought important validation of Lehman’s historical and technical research. In October, the organ builders notified Lehman that they were “very excited about the sound” and committed to using it, both for musical and historical reasons. The Goshen College pipe organ is now the first full-sized organ to be tuned this way since Bach’s work in the 18th century. The college will inaugurate its new pipe organ, the Opus 41, with a dedication service and a series of concerts in the Music Center’s Rieth Recital Hall May 1-8, 2005 (see www.gcmusiccenter.org for details).

Lehman’s research is available in the online version of “Early Music” journal at em.oupjournals.org. Lehman has also created a personal Web site with extensive information about his findings at www.larips.com.