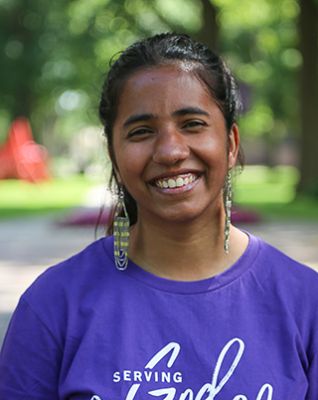 By Nithya Abraham, a junior music and information technology major from Bangalor, India

Why is it so difficult for us to blindly trust God? Why is it difficult to have faith in Him like Abraham did?

As I was reading Romans chapter 4, the first thing that popped into my mind was delayed gratification. I had taken an introductory online psychology course a few years back, and one of the things I had learned from this course was “The Marshmallow Experiment.” In the 1960’s an experiment was conducted with hundreds of children, all around the age of 4 and 5.

All the kids were taken into a room and presented with one marshmallow by the researcher. They had one choice. They could eat the marshmallow right then, or they would get an extra one if they waited for some time. The researcher then left the room. Some of the kids ate their treat right then, and some waited.

Years later, the psychologists (who were tracking the kids progress for years) discovered that the kids who had waited had shown a greater likelihood of succeeding.

Why is this important, and why did I think of this at this time? I had the same questions. As I pondered upon this, I realized that our faith is so much like the kids who ate the marshmallows immediately. I think that my faith too is dependent on what I will receive immediately. I find it so difficult to keep my faith constant when I do not see the outcome or my blessing right in front of my eyes.

Abraham received a promise of a blessing from God, and just like that he left his family behind to follow God’s word. God’s promise was fulfilled generations later, and still the faith Abraham had in God was unshakable. Nicodemus was told that only if he was born again would he have a place in the Kingdom of Heaven.

“For God so loved the world, that he gave his only begotten Son, that whosoever believeth in him should not perish, but have everlasting life.”

What then are we to say was gained by Abraham, our ancestor according to the flesh? For if Abraham was justified by works, he has something to boast about, but not before God. For what does the scripture say? ‘Abraham believed God, and it was reckoned to him as righteousness.’ Now to one who works, wages are not reckoned as a gift but as something due. But to one who without works trusts him who justifies the ungodly, such faith is reckoned as righteousness.

For the promise that he would inherit the world did not come to Abraham or to his descendants through the law but through the righteousness of faith. If it is the adherents of the law who are to be the heirs, faith is null and the promise is void. For the law brings wrath; but where there is no law, neither is there violation.

For this reason it depends on faith, in order that the promise may rest on grace and be guaranteed to all his descendants, not only to the adherents of the law but also to those who share the faith of Abraham (for he is the father of all of us, as it is written, ‘I have made you the father of many nations’)—in the presence of the God in whom he believed, who gives life to the dead and calls into existence the things that do not exist.

Now there was a Pharisee named Nicodemus, a leader of the Jews. 2He came to Jesus by night and said to him, “Rabbi, we know that you are a teacher who has come from God; for no one can do these signs that you do apart from the presence of God.” 3Jesus answered him, “Very truly, I tell you, no one can see the kingdom of God without being born from above.” 4Nicodemus said to him, “How can anyone be born after having grown old? Can one enter a second time into the mother’s womb and be born?” 5Jesus answered, “Very truly, I tell you, no one can enter the kingdom of God without being born of water and Spirit. 6What is born of the flesh is flesh, and what is born of the Spirit is spirit. 7Do not be astonished that I said to you, ‘You must be born from above.’ 8The wind blows where it chooses, and you hear the sound of it, but you do not know where it comes from or where it goes. So it is with everyone who is born of the Spirit.” 9Nicodemus said to him, “How can these things be?” 10Jesus answered him, “Are you a teacher of Israel, and yet you do not understand these things? 11“Very truly, I tell you, we speak of what we know and testify to what we have seen; yet you do not receive our testimony. 12If I have told you about earthly things and you do not believe, how can you believe if I tell you about heavenly things? 13No one has ascended into heaven except the one who descended from heaven, the Son of Man. 14And just as Moses lifted up the serpent in the wilderness, so must the Son of Man be lifted up, 15that whoever believes in him may have eternal life. 16“For God so loved the world that he gave his only Son, so that everyone who believes in him may not perish but may have eternal life. 17“Indeed, God did not send the Son into the world to condemn the world, but in order that the world might be saved through him.