To accompany our powerful Scripture today, I was really hoping to have a modern resurrection story to share with you on this Easter Sunday 2017.

During the middle of Lent — on March 12 — a 34-year-old Mennonite named Michael (MJ) Sharp and his colleagues (Zaida Catalan from Sweden, and four Congolese assistants, including Betu Tshintela and Isaac Kabuayi) were kidnapped in the Kasai region of the Democratic Republic of the Congo during a United Nations Group of Experts investigation into war crimes. Family, friends, former colleagues and people who only heard about the situation lit candles, held vigils, said many prayers and deeply hoped for a positive outcome. We all desperately wanted an Easter miracle and for the light to overcome the darkness of the world: for their captors to repent and the group to be safely freed. 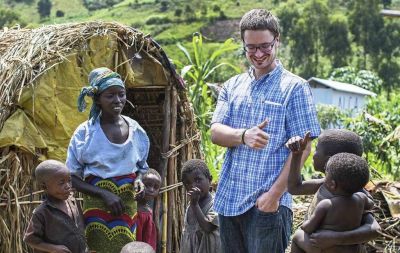 Michael Sharp visits with Elizabeth Namavu and children in Mubimbi Camp, home to displaced persons in the Democratic Republic of Congo. (Photo courtesy of MCC)

And then on Monday, March 27 — 15 days later — word started to trickle out that several bodies had been found in a shallow grave near where the group disappeared — likely MJ and Zaida. The next day, the news was confirmed.

In the days since, there has been much weeping and lament over this awful outcome, and I have wept as well for these people I didn’t know personally. But I am also struck over and over again about how much this IS a resurrection story.

I have learned about MJ’s powerful work in the Congo through Mennonite Central Committee that included working as a peacemaker with a brutal armed group and helping persuade at least 1,600 rebels to put down their weapons. He was described in a New York Times article as having “tremendous empathy, even for some of the nastiest people he worked with.” His parents — Goshen College alumni John and Michele Sharp — have shared that in his work, while dangerous, MJ wasn’t afraid to die and that he did it because he had a greater purpose: love for God and all fellow human beings. His friend, Goshen College alumnus Tim Nafziger, wrote this beautiful poem as a eulogy and what it “feels like when a friend becomes a seed.”

I want to be careful, as MJ was no less human than any of the rest of us. But witnessing the passion and commitment of a young person risking his life following in the footsteps of Jesus IS a resurrection story. This is a story of someone who believed that the nonviolent way of Jesus brings about change in individuals’ lives and in the broader world. And that that change is right, true and worthy of pursuit — even if that meant putting himself in danger. That is a very powerful witness, even in death.

I also know there are many other “MJ” kinds of people doing faithful, hard, dangerous work around the world, and I am struck that it has only been though MJ’s death that most of us have been able to bear witness to his powerful resurrection story. As well, in lifting his story up, we must keep in mind the millions of unnamed Congolese who have died over the past two decades of this ongoing and awful conflict without international awareness. MJ would have wanted us to; he died asking us to pay attention and to respond with Christ-like love.

As I come back to the wonderful, empty tomb in today’s Scripture, I am also reminded of the reality that Jesus’ resurrection story was also preceded by his faithful, risk-filled life and then a torturous, horrible death. The paradox of death and life, and of risk and resurrection, are quite simply the essence of the Easter story. For indeed we are promised that death and darkness are not the end; new life and hope await each of us.

Thank you for reading and responding to our Lenten devotional series and theme, “Restore us, O God!” We hope you join us again in the winter as Goshen College students, faculty, and staff offer daily devotions during the Advent season. Peace!

But on the first day of the week, at early dawn, they came to the tomb, taking the spices that they had prepared. 2They found the stone rolled away from the tomb, 3but when they went in, they did not find the body. 4While they were perplexed about this, suddenly two men in dazzling clothes stood beside them. 5The women were terrified and bowed their faces to the ground, but the men said to them, “Why do you look for the living among the dead? He is not here, but has risen. 6Remember how he told you, while he was still in Galilee, 7that the Son of Man must be handed over to sinners, and be crucified, and on the third day rise again.” 8Then they remembered his words, 9and returning from the tomb, they told all this to the eleven and to all the rest. 10Now it was Mary Magdalene, Joanna, Mary the mother of James, and the other women with them who told this to the apostles. 11But these words seemed to them an idle tale, and they did not believe them. 12But Peter got up and ran to the tomb; stooping and looking in, he saw the linen cloths by themselves; then he went home, amazed at what had happened.