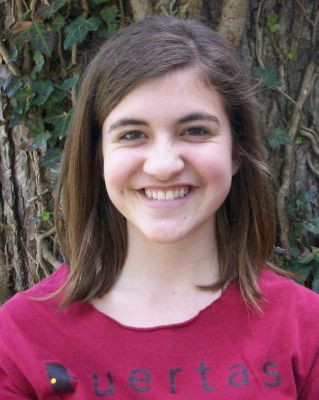 By Hillary Harder, a senior music and Spanish double major from Wichita, Kansas

Lately I have found myself thinking a lot about Mary. The Virgin, sweet and mild, holy and pure, the mother of God. She is praised in countless songs and hymns, depicted in art of all time periods and styles, and revered across the globe. As the Virgin of Guadalupe, for example, she acts as the patron saint of Mexico, offering strength, comfort and a sense of identity to Mexican people. Mary is one of few women featured in the Bible, and has provided a welcome space for the empowerment of women in the biblical narrative.

But underneath all this, who is Mary? What is most notable about her – her youth, her poverty, her virginity? I find myself grasping for a glimpse of a real, human woman. The lofty standard of both virgin and mother is one that women can never achieve, and can sometimes create an unrealistic ideal of womanhood. I can’t help but wonder whether Mary was more than a little perplexed by the angel Gabriel’s announcement: whether she felt fear, disbelief, or even resentment. In other words, I struggle to find a sign that Mary is someone to whom I can relate.

Yet in the face of my doubt, the text offers hints of what I am seeking. The writer takes care to note Mary’s confusion, followed by deep thought. And her initial reaction is human enough, wondering about the logistics of a virgin pregnancy. Upon closer examination, the human aspects of Mary make her resounding “yes” to God’s call that much more remarkable. What is most notable about Mary – the virgin engaged to Joseph, the young girl from Galilee – is her unflinching faith. Her profound offering of herself as a servant of God will, as we know, later be followed by a subversive and hopeful vision of the future, the Magnificat. It’s true, Mary is no ordinary woman. But she does show a powerful example of how a human life can be offered to serve God. May we honor Mary for this extraordinary act of faith.

In the sixth month the angel Gabriel was sent by God to a town in Galilee called Nazareth, 27to a virgin engaged to a man whose name was Joseph, of the house of David. The virgin’s name was Mary. 28And he came to her and said, “Greetings, favored one! The Lord is with you.” 29But she was much perplexed by his words and pondered what sort of greeting this might be. 30The angel said to her, “Do not be afraid, Mary, for you have found favor with God. 31And now, you will conceive in your womb and bear a son, and you will name him Jesus. 32He will be great, and will be called the Son of the Most High, and the Lord God will give to him the throne of his ancestor David. 33He will reign over the house of Jacob forever, and of his kingdom there will be no end.” 34Mary said to the angel, “How can this be, since I am a virgin?” 35The angel said to her, “The Holy Spirit will come upon you, and the power of the Most High will overshadow you; therefore the child to be born will be holy; he will be called Son of God. 36And now, your relative Elizabeth in her old age has also conceived a son; and this is the sixth month for her who was said to be barren. 37For nothing will be impossible with God.” 38Then Mary said, “Here am I, the servant of the Lord; let it be with me according to your word.” Then the angel departed from her.