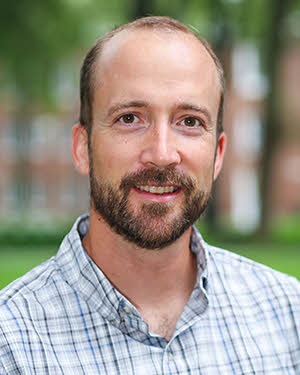 By Jonathon Schramm, assistant professor of sustainability and environmental education

At first read, this passage, buried deep in the historical books of the Old Testament, seems to have little to do with Advent. What does it mean that our God is far less interested in having a permanent house built than in ensuring the Israelites will find rest, will be at home?

This reading begins with an almost routine checking off of another key item on King David’s to-do list: building a temple to the Lord. His trusted spiritual advisor (and gadfly) Nathan endorses David’s plan to get started on this building project right away. They are both ready to see that God is given due glory, now that the kingdom is “settled.” But God’s response, as it so often does for all of us, takes David and Nathan in an entirely new direction. God stridently defends the transient life that He has had with His people over the preceding centuries. And even more surprisingly, God insists that His intentions for settling the people securely in their land, and for providing a just and loving king to rule over them, are far from finished. It becomes quite clear to both David and Nathan that if anyone is going to be a home-builder here, it is God, and it will be built in God’s time.

And thus we return to Advent, where we join Nathan and David in waiting for the arrival of the only King who can be gracious enough to build a home spacious enough for the whole world.

4But that same night the word of the Lord came to Nathan: 5Go and tell my servant David: Thus says the Lord: Are you the one to build me a house to live in? 6I have not lived in a house since the day I brought up the people of Israel from Egypt to this day, but I have been moving about in a tent and a tabernacle. 7Wherever I have moved about among all the people of Israel, did I ever speak a word with any of the tribal leaders of Israel, whom I commanded to shepherd my people Israel, saying, “Why have you not built me a house of cedar?” 8Now therefore thus you shall say to my servant David: Thus says the Lord of hosts: I took you from the pasture, from following the sheep to be prince over my people Israel; 9and I have been with you wherever you went, and have cut off all your enemies from before you; and I will make for you a great name, like the name of the great ones of the earth. 10And I will appoint a place for my people Israel and will plant them, so that they may live in their own place, and be disturbed no more; and evildoers shall afflict them no more, as formerly, 11from the time that I appointed judges over my people Israel; and I will give you rest from all your enemies. Moreover the Lord declares to you that the Lord will make you a house.