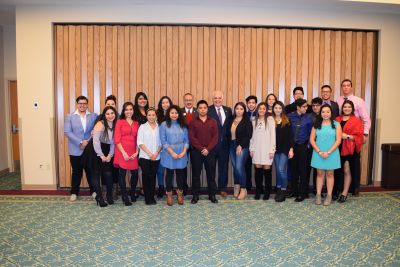 For the second time, Goshen College held a Latino Scholarship Dinner to raise money to provide $2,500 scholarships for Latino students. Former state Rep. Rebecca Espinoza Kubacki, who grew up as a migrant farm worker in Syracuse, suggested the college host a scholarship dinner for Latinos and the idea was brought to life by President James E. Brenneman, Vice President for Institutional Advancement Jim Caskey and Richard Aguirre, who is the college’s director of corporate and foundation relations.

Hoping to build on the success of the first dinner, the second dinner took place on Feb. 2 in the Fellowship Hall of College Mennonite Church. Among those in attendance were Goshen Mayor Jeremy Stutsman, Goshen Community schools Superintendent Diane Woodworth, leaders of many businesses, churches and non-profit organizations as well as Goshen College alumni, faculty, staff and students.

Aguirre, who coordinated the dinner, said members of the college’s Development Office worked for several months to make this dinner a success. “The highlight of the dinner for me was bringing together 22 bright, engaged and charismatic Latino students with a wide range of Elkhart County leaders,” Aguirre said. “The dinner showed that community members will support Latino students and value their talents and potential. They listened respectfully to the stories of our Latino students and were moved by their honesty, creativity and intelligence.”

The evening opened with a welcome from President Brenneman, who explained the importance of supporting Latino students and discussed the goal of Goshen College becoming an Hispanic Serving Institution (HSI), one with a Latino undergraduate enrollment of at least 25 percent. Before about 170 guests, Brenneman said that that the college hoped to raise more than the $50,000 raised at the first dinner, which was in November 2015.

Rebecca Kubacki, who served as the emcee for the dinner program, began her remarks by talking about her support for Latino students who have chosen to attend college to fulfill their dreams. She then shared the story of her family, which was illustrated by a video showing the Indiana farm where her family sometimes worked and lived.

Her family members worked as migrant farm workers, following the crops across the United States, including in California, eventually making their way to Indiana and settling here. A highlight of her speech was Kubacki’s introduction of her mother, who was greeted with sustained applause. During her speech, Kubacki also said, “We have to be thankful for those who have gone before us.” 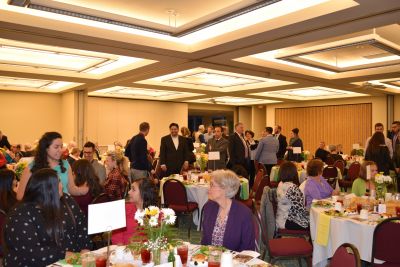 Following Kubacki’s remarks, José Chiquito, a first year student at Goshen College, gave a welcome on behalf of students. Chiquito studies sociology and is a member of many clubs on campus, including the Latino Student Union. He also serves on the board of directors for Maple City Market.

Chiquito talked about his experiences growing up in Goshen and attending Goshen High School as well as searching for a college to attend. “When I began [the search], the only thing that I knew is that I wanted to leave Goshen,” he said. “Now I know that I made the best decision in staying here because I could never find another community like this one.”

Chiquito also talked about how grateful he was to be a part of the community, and also how he regrets having taken Goshen for granted when he was growing up. “I don’t remember any place besides Goshen, since I came when I was 3,” he said. “I am very grateful for all of the memories that this place has given, and continues to give me.”

The next speaker was Marlette Gomez, a 2013 social work graduate from Goshen College who now works as the college prep coach at Goshen High School. In her job, she helps high school students who want to take the next step and attend college but don’t know how to apply or seek financial aid. She talked about some of her students saying, “Only a few weeks ago two students that weren’t thinking about going to school told me that they had decided to continue their education at college.”

Gomez said too many Latinos don’t fulfill their potential, but it’s time to start trying. For more Latinos to attend college, Gomez said students have to prepare in advance and get the help they need to navigate the college application process. Many Latino students don’t know what to do because their parents did not have that experience, and as a result they give up their dreams of going to college.

Samantha Camacho, the next speaker, is a first-year student at Goshen College who wants to major in business. After graduation, she hopes to create more opportunities for young people who need them when they are in college and after they graduate.

Another speaker, who was at the dinner for the second time, was Isaac Torres, founder and president of InterCambio Express, which transfers funds for clients throughout the world.

Torres made it clear that education is necessary for the continued growth and prosperity of the Latino community, “Education is a long-term investment that requires a lot of sacrifice,” he said.

Torres, his wife, and son donated $5,000 to the scholarship fund, and to symbolize the gift, they presented President Brenneman with an oversized cardboard check. Torres’ son spoke briefly and stated that young people can accomplish what his father did, which was to take advantage of the opportunities offered to him as he worked his way into his current position as owner of a successful business.

Following the presentation of the check, Torres introduced the keynote speaker, Dr. Gilberto Cárdenas, the executive director of the Center for Art and Culture at the University of Notre Dame.

Dr. Cárdenas described the journey of his life in Southern California. After graduating from a high school in a poor and violent neighborhood, he was involved in activity which he said could have resulted in serious legal problems. However, Cárdenas said he managed to attend college, made a big change in his life and thrived as a student.

Cárdenas emphasized the importance of being open to opportunities that can lead to further education and personal growth. Cárdenas said, “Take advantage of each opportunity that you have and go for it.” 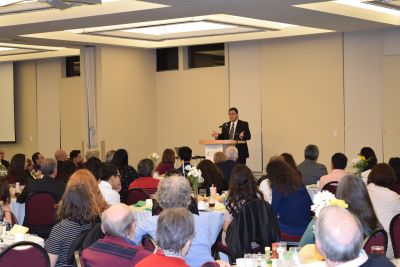 Dr. Gilberto Cárdenas was the key speaker at the Latino Scholarship Dinner. He told his stories with some former US Presidents such as Barack Obama and George W. Bush.

He also talked about collaborating with Presidents George W. Bush and Barack Obama. “They had the pleasure of meeting me,” he joked, which drew laughter from the audience.

The closing speaker of the night was Janeth Vela, who is finishing her bachelor’s degree at Goshen in nursing. “I chose to be a nursing major because it involves two things I really love, which are science and people. Listening to people’s stories is just as important in helping them get better as taking care of their health,” Vela said, adding that she also wants to help those who speak only Spanish. “Seeing the difficulty some patients experienced when a nurse didn’t know their native language made me even more passionate to be a nurse because I can offer patients that additional support and comfort of knowing someone else understands what they are saying.”

Vela became emotional when she described her hopes for the future and the sacrifices her parents made for her to grow up in Goshen and attend college. Said Vela, “I’m just one of many students who wants to and will continue to work hard with the hopes of providing a better future for our families. Our families have worked hard throughout their entire lives to get us here, and many have had to make sacrifices one way or another to get us to where we are today. We are their hopes and dreams, and we work hard to make them proud. They are our inspiration to continue every day, and we won’t stop until we fulfill their dreams.”

After the event, Aguirre said, “As a fund-raising event, the Latino Scholarship Dinner has been a great success. It also has brought to our campus community members who have never visited Goshen College. And it has given Latino students an opportunity to share their stories and shine in the spotlight.”

Aguirre said it hasn’t been decided if there will be a third Latino Scholarship Dinner. He said the cost of the dinner – $100 per seat or $650 for a table of eight – may be the reason some Latino community members have not attended. He also said the dinner takes considerable staff time and effort to arrange and there may be more effective ways to raise funds for Latino scholarships.

“Still, if I had to guess today, I believe we will host another Latino Scholarship Dinner,” Aguirre said. “There was such positive feedback from our guests and from our Latino students that holding another dinner would be a worthwhile investment of our resources and I believe even more people would attend.”