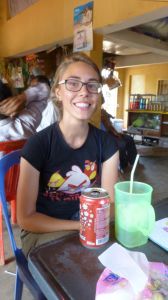 This is the second of three posts we are putting up tonight — the first on Jacob M and Lauren in Ba Phnom, this one on Jessie’s accompaniment assignment, and a third on the Graber Millers’ lives in Phnom Penh.

On Wednesday visiting SST Director Tom Meyers as well as Keith and Ann went to visit Jessie in Tang Khiev, adjacent to Preah Reachatrab (Oudong) Mountain in Kandal Province. The trip to Jessie’s village is about a two-hour tuk-tuk ride from the southern part of the city, where the Graber Millers live.

Tang Khiev is a relocation site established in 2009 for families evicted from the Dey Krahorm community after 7NG, a construction and real estate company, purchased the land out from under the community. Residents of Dey Krahorm received no compensation for the land, and were forcibly evicted after several months of resistance. One day police and bulldozers showed up when many community members were away at school and work and bulldozed and burned their homes, then loaded people onto the back of dump trucks and hauled them 54 kilometers away to barren land — with no food, no structures, no construction materials, and no food.

Slowly community members have organized themselves and sought to build themselves bamboo and thatch homes — 154 homes in all, as of early March. In the initial days after their relocation, one community member sold her hair to purchase a blue tarp and stakes to give her family some shelter (think Les Miserables). Canadian Kevin Knight and his Cambodian spouse, Leakhena, live in the community, too, encouraging members of the community, assisting with building, and helping organize microfinancing and community governance. Mana4Life is Kevin and Leakhena’s NGO, and the organization which helped arrange for Jessie’s stay in Tang Khiev.

Jessie, who is doing a solo service stint, lives with her host mother, host sister, and several nieces, while other family members are scattered from Phnom Penh to Kampong Cham. Each morning Jessie teaches a one-hour English class, and she and a Cambodian friend her age are tutoring each other in Khmer and English. On some days she assists with basic computer training on computers donated by a Canadian organization. Jessie also spends time with her nieces and other neighborhood children. Tom, Ann, Keith, and Jessie all had lunch Wednesday on the floor where Jessie sleeps. The day after we left Tang Khiev, one of her neighbors and friends taught her how to make the baskets crafted in the community and the longer term community adjacent to it.

Jessie lives directly across from an adjacent property leased by a Chinese company that is digging an enormous pit to haul away the dirt for other construction projects. Large dump trucks haul dirt away from the site every few minutes. Once the land is decimated and useless for agriculture or any other purpose, the company will sell the land back to the government.

Jessie seems to be thoroughly enjoying her accompaniment. Something of an introvert, when she needs a break from people, she rides bike around Oudong Mountain and stops outside of the community to read and journal, though she is often joined by neighborhood children. This weekend she is visiting Maryn and Carina in Kep, joined by Henry and Renae from Kampong Cham. Jessie dropped by the Graber Miller apartment for an hour this morning on her way to Kep.

Today (March 8) is Nate’s birthday, and he is celebrating with Brett, Jake, and other SST friends in Siem Reap. Tom Meyers leaves Cambodia for China Saturday morning, and the Graber Millers leave early Sunday morning for Ratanakiri Province, where they will see Corey, Sarah T, Madeleine, Kate, and Seth. Be sure to read the blog on Lauren and Jacob M’s assignment in Ba Phnom.