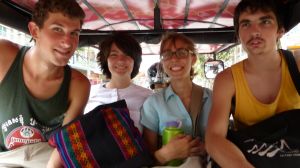 Although students already are out on service, scattered across five provinces in eight different service sites, we wanted yet to post photos of their final week in Phnom Penh before leaving last Friday for the “accompaniment” portion of SST.

It was a full week of classes and activities. Among the highlights of the week were:

The Graber Millers are at home in Phnom Penh, relaxing a bit before beginning our journeys to the provinces to see the students. Next week we’ll visit Jessie in Oudong and Lauren and Jacob M in Ba Phnom — two of the nearer sites. SST Director Tom Meyers also will be visiting from the U.S., and he may accompany Keith and Ann on one of the visits.