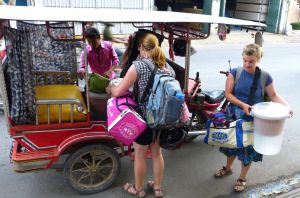 Students all left for service on Friday morning, most meeting at and departing from the Graber Miller apartment. Some came early for breakfast, others arrived later in the morning, but all were on the road by 1 p.m. The day was not without its snags and demi-traumas (a missed bus to Ratanakiri, non-functioning phones, a purse snatched from a bicycle basket by a passing motorcyclist), but students were all in good humor as they left for their service locations.

Thursday afternoon the group met at the Graber Miller home to take a final quiz, do family and academic program evaluations, offer village study reports, and undergo yet another orientation — for service. As the Graber Millers said then, “Every service experience is different, every village is different, every family relationship is different. But all are worthwhile and often transformative experiences. SST-style ‘service’ usually is not doing something for people that they couldn’t do on their own, but accompanying others and learning from them, honoring their way of living and their vocations. ‘Accompaniment’ is probably a better term to use than ‘service.’ In the spirit of SST, we invite you to see every new experience as an opportunity to explore and expand or an obstacle to overcome. See each challenge as a ‘teachable moment’ in which you ask the question, ‘What have I learned?'”

Here, then, is a brief rundown of where the 18 students are on service:

Students all seemed to be pumped for their service assignments, and we think they’ll do swimmingly.

We’ll be posting fewer blogs hereafter, though in a couple of days — in the dry period before we begin visiting students at their service locations — we’ll post photos of the last week of activities and classes in Phnom Penh. And once we begin our visits, we’ll also post photos of students on location as well.