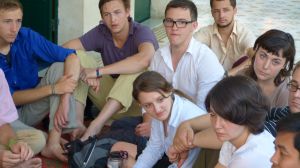 (This is one of three blogs posted today, so please see Kate Yoder’s reflections as well as the blog post on our trip to Kep and Rabbit Island.)

Over the last week students continued to have Khmer language classes each morning. The four language teachers have done a good job responding to students’ language needs, as can be seen in the whiteboard script about having glasses repaired. Corey needed to locate a small screwdriver or optometrist to do a minor repair to his glasses. One of the teachers, Mr. Chorry, regularly works with his class on Khmer script, while the other teachers do not work with script but with conversational Khmer and grammar.

Last Friday we were able to visit one of the local mosques, just a few blocks from the Graber Miller apartment. Our local assistant, Sen Marya, is Cham Muslim, so she was able to arrange for this visit with the local imam and a young Ph.D. student. The Cham people were part of the Cham Empire which eventually was conquered by/absorbed into Vietnam, though many fled elsewhere in Southeast Asia. Some of those Cham peoples wound up in concentrated areas in Cambodia, now numbering about half a million — the largest religious minority. Most Cambodians are Theravada Buddhist, of course, though for many this is nominal Buddhism or Buddhism lite, blended with an animist base.

In Cambodia, our lecturer told us, Muslims are quite welcome and are not discriminated against. They do not try to evangelize others, and others do not try to evangelize them. Muslim calls to prayer are not broadcast loudly in Muslim areas of Phnom Penh, but instead come on people’s cell phones, reminding them five times a day that it is the hour for prayer.

Yesterday the group heard from Helen Sworn, founder of Chab Dai (Joining Hands), an organization that works with Human Trafficking. This was again an excellent lecture about a topic we’ve heard bits and pieces about. Human trafficking, including selling people into prostitution, is a major issue in Cambodia, prompted by the push factors of poverty and lack of education and the pull factor of sexual tourism as well as lax enforcement of relatively decent laws regarding trafficking.

Also included here are a few shots from last week’s P’teah Goshen Night at the Graber Miller apartment, including one shot of students reviewing the blog. Families usually see the blog photos a few days before students do.

(This is one of three blogs we’re posting today: one on our weekend trip to Kep and Rabbit Island, and one by Kate Yoder on her impressions of Cambodia thus far. Please take a look at these blogs as well.)