We’re preparing for a weekend trip to the south coast of Cambodia, where we will observe, analyze, and immerse ourselves in the Natural World components of the SST experience. Before that, though, we wanted to hear from another student’s perspective, this time from Jessie, who wrote in her journal about her experience with interviewing her host father about his time in the Khmer Rouge period. 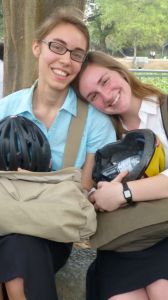 From Jessie’s journal (with permission):

People who evacuated the city lived in the countryside. As people evacuated the city, mice and rats began to invade because there was no one to scare them off. My dad lived in the countryside. Every morning a bell would ring at 4 a.m. and everyone had to get up to work. They used a torch to light the way to the fields. For a meal one pot of rice and a little bit of milk fed 30 people.

Husbands and wives could not see each other and parents could not see their children. Everyone was divided up into groups of age and gender. The Khmer Rouge used the potato root to tie up people in order to kill them. My dad saw with his eyes people being buried alive. He had to close his eyes and not say a word as his brother was killed. He said the Khmer Rouge soldiers would walk around at night and kill anyone who was talking badly about the Khmer Rouge.

All possessions were lost. My dad gave up his watch to a soldier. Anyone who refused to hand over their possessions was shot. My dad says that it makes his heart hurt and his brain throb when he tells the stories. He does not have words to describe the pain.

He does not support the Khmer Rouge trials because he believes they are useless. The people on trial are too old.

I feel honored that my dad trusted me enough to tell me more about his personal experience during the Khmer Rouge time. I do not know the pain he went through, and I know he cannot describe it in words. I have not heard anyone tell me a tragedy like this — to lose a family member while not being able to say anything about it. Some of our Khmer lecturers have talked about how passive the Cambodian culture is, but I would like to add how strong and courageous they are to face every day after experiencing a horrible past. I see strength in my dad’s survival story.