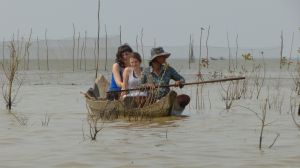 Among the memorable parts of the Siem Reap field trip was Saturday’s adventure to Kampong Phluck, a village built on 20-foot stilts right along the Tonle Sap. Two students — most likely Audrey and Joel — will do their service assignments at the village, teaching English and possibly basic computer skills. The village is memorable because of the complexity of getting there, and because of the otherworldliness of the wooden homes rising out of the ground. Because of the yearly expansion/flooding of the Tonle Sap Lake and the flatness of the central part of the country, most provincial Cambodian homes are built on stilts. Usually these stilts are only five to 10 feet high, but in Kampong Phluck they are double or quadruple those figures because of the proximity to the lake.

The Tonle Sap is the largest freshwater lake in Southeast Asia, providing irrigation waters for close to half of the population of Cambodia. From mid-May to early October (the rainy season) the lake swells from 2,500 square kilometers to 13,000 square kilometers or more. Its maximum depth increases from about 2.2 meters to more than 10 meters. This extraordinary process makes the Tonle Sap one of the world’s richest sources of freshwater fish, as flooded forest makes for a fertile spawning ground. Another unique feature related to the annual flooding is that the 100-kilometer Tonle Sap River, which connects the lake to the Mekong River, changes directions — it flows northwest into the Tonle Sap Lake during the rainy season, and then reverses its flow to the southeast as the Mekong begins to fall.

The trip to Kampong Phluck is all about the journey, though the destination is fascinating, too. The road toward the village has been developed immensely since 2010, when the last SST group ventured that direction. A Korean company has smoothed out the road so the village is actually accessible by bus at this time of the year; during the flooding season, the road is underwater. However, instead of driving into Kampong Phluck we stopped our bus midway back and took a large, open boat down the river and on past Kampong Phluck and its sister villages.

At the mouth of the Tonle Sap, we did a Cambodia SST First: we hired local fisherwomen to take us out on their small wooden boats, two or three per boat, into the Tonle Sap Lake. These are the typical, day-to-day vessels for Cambodians who live along the rivers, but we’ve never been able to take such a journey before.

At Kampong Phluck we visited the local wat, which is related to the school where our students will teach, and then proceeded to walk through the town. We were able to meet with the community leader and the village chief about our students doing service in the village, trying to work out some of the details prior to Audrey and Joel’s arrival there February 22. Several of the students enjoyed interacting with the local children, who were eager to talk with the visitors.

Almost all of the photos in this blog were taken by Mia. Be sure to read the other two blogs about the Siem Reap trip, which chronicle our visits to the Angkor Wat temples and the Spider Village.