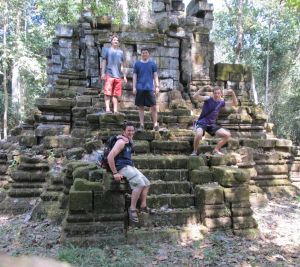 One of the things our Cambodia SSTers were anticipating was their visit to the ancient temples of the Angkor Wat temple complex, the subject of much academic study and the backdrop for many Hollywood Films (e.g., “Lara Craft: Tomb Raider” and “Two Brothers”). On Friday, groups of three or four students each toured the Angkor grounds on bicycles and in tuk-tuks, lingering longer at some temples than others. The Angkor Wat trip was part of a four-day excursion to Siem Reap, located near the Tonle Sap Lake. Today we are posting three blogs about the trip, so please take a look at the ones on Kampong Phluk and Skuon (the Spider Village) as well.

The temples of Angkor, capital of Cambodia’s ancient Khmer empire, represent the height of the Angkor Empire between the 9th and 13th centuries. The Cambodian god-kings of this period — some Hindu, some Buddhist — strove to outdo their predecessors by building, larger, more majestic temples in each subsequent century. The hundreds of surviving temples are the sacred skeleton of the vast political, religious, and social center of the empire that stretched from Vietnam to Burma. At its peak, Angkor boasted a population of a million, while at the same time London was a measly town of 50,000. Cambodians continue to be inspired by the Angkor temples and their sacred history, when the Angkor Empire ruled essentially the whole of Southeast Asia. A delightful new novel about this period is John Burgess,  A Woman of Angkor (Bangkok: River Books, 2013), which some of the students are reading.

King Jayavarman II (802-850) founded the empire in 802, and later emperors built on his start. Jayavarman VII (1181-1219) was the king of kings and the one who built most of the temples we saw in our one-day visit, including the vast complex of Angkor Thom, which includes the famous Bayon temple with multiple images of Jayavarman looking out in all directions; Preah Khan; and Ta Prohm, the picturesque temple that is nearly completely overtaken by the huge roots of trees.

Most previous rulers were committed to the Hindu deities Shiva or Vishnu, but Jayavarman VII adopted Mahayana Buddhism and looked to Avalokiteshvara, the Buddha of Compassion, for patronage during his reign. (Most Cambodian Buddhists today are part of the Theravada Buddhist stream rather than Mahayana.) After Jayavarman’s death in 1219, the empire went into decline and the state religion reverted to Hinduism for a century. After the Thais sacked Angkor in 1351 and again in 1431, the Khmer court moved to Phnom Penh, returning only briefly to Angkor in the 16th century but otherwise abandoning the enormous temple complex — covering hundreds of square miles — to pilgrims, holy men and women, and the natural elements.

Angkor was “rediscovered” by Westerners in the 1860s, capturing the world’s attention. Cambodians, of course, knew Angkor was there all along, and when French explorer Henri Mouhot stumbled upon the temple complex it included a wealthy, working monastery with monks and slaves. Portuguese and Japanese pilgrims in previous centuries also had come across the complex, but Mouhout’s 1868 book exposed Angkor to the public eye. Because most of the temples were abandoned to the jungle for centuries, and because many were made of sandstone, which tends to dissolve when in prolonged contact with dampness, the natural elements took their toll on the majestic complex.

The photos here show a number of the temples, plus the monkeys we encountered along the way, and other scenes from Angkor. In addition, we’ve included photos from our Thursday afternoon field trip to a village 7 kilometers outside of Siem Reap, where villagers make palm bark boxes for Rajana, a local fair trade organization with which both Ten Thousand Villages and Found gallery in Goshen work. Some of the boxes pictured here will end up at Ten Thousand Villages’ locations around the U.S. We’ve also included some photos around the pool and breakfast table at the Frangipani Villa in Siem Reap, where we stayed three nights on the field trip; shots from the bus; Keith and Simon’s fish foot massage, where fish eat the dead skin off of your feet; and assorted other shots from the journey. Be sure to see the other two posts about the Siem Reap trip as well. Photos in this blog include those taken by Mia, Keith, Sarah T, Maryn, Sara K, Joel, Renae, and others. It was a great honor to be exposed to this holy site for the Cambodian people.