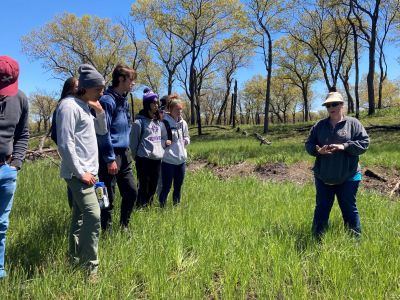 Jennifer Kanine, Director of the Department of Natural Resources for the Pokagon Band Potawatomi

The author of this post is Naomi Ross Richer, a first-year Deaf Studies major from Goshen, Indiana:

The southern shore of lake Michigan is home to Mnomen, known as wild rice in English. This staple in the traditional Potawatomi diet was almost lost when swales (swamp lands) were drained for the expansion of nearby cities. Our May Term class was fortunate to spend several days exploring Indiana Dunes National Park where we were introduced to the largest mnomen swale found in the region. 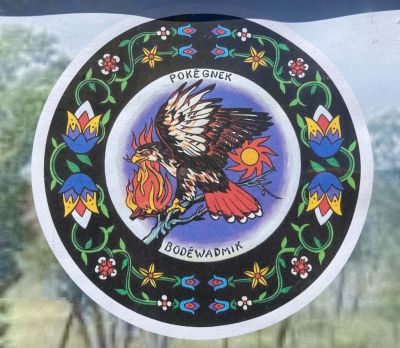 Jennifer Kanine, Director of the Department of Natural Resources for the Pokagon Band of Potawatomi met us at Douglas Interpretive Center and gave us a brief talk explaining the role that mnomen played in Potawatomi diet and trade, as well as the traditional way to harvest the rice. Mnomen was commonly eaten every day, either with berries, maple syrup or fish. Traditionally the rice was harvested by two people weaving a canoe through the rice swale. The person in the back of the boat pushed with a large Y-shaped stick to move the canoe slowly through the plants while the person in front knocked the plants with two sticks, making the rice fall into the canoe. 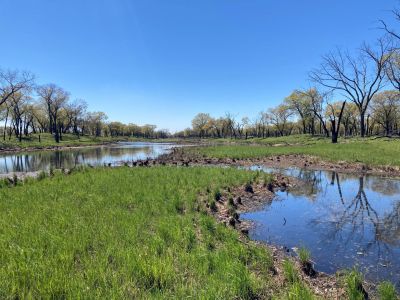 After her talk, Jennifer guided us down a dirt road, through some sedge land, and to a view of what looked like a pond. She stopped there and, since it was still only May, told us to use our imaginations to picture green sprouts as tall as us covering the surface of the pond. Mnomen seeds spend the winter burrowed in the muck of the pond. When the weather begins to warm up the seeds float to the surface, sprout and latch on to each other, creating a floating pad of mnomen plants that can ebb and flow as the level and current of the body of water change.

Though mnomen is a very flexible and easy-going plant in its natural environment, the circumstances that surround it today are not ones it is used to. Phragmites and cattails are two plants that thrive in the same environment as mnomen and are unfortunately more dominant when it comes to competing for resources. The overpopulation of beaver in the region has also messed with the growth of mnomen. 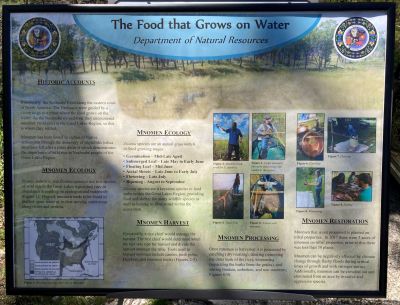 The ultimate decimating factor for mnomen, however, is climate change. Jennifer actively takes part in helping mnomen navigate the changing climate. She explained that as the climate where mnomen grows comfortably moves further north her role as a keeper of mnomen is to move seeds from here to the north, where the climate will be like it is here in several years. Another important role for her is to look ahead on the forecast to see when unnaturally big storms are on their way and go out and wrap several bunches of mnomen tuffs with canvas to prevent all the immature seed pods from falling off the plant and drowning before they are mature enough to burrow for the next growing year.

Jennifer’s passion for protecting what little mnomen is still left in this region is inspiring. If we all just chose one plant to stand up for and protect, maybe the biodiversity in this region would no longer be endangered.