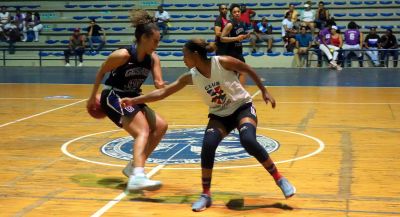 Greyson deftly gets around a defender.

Monday and Tuesday both had morning Spanish classes, along with a lecture Monday afternoon on the history of religion in the Dominican Republic.  The next afternoon we took a field trip into the center of the city to the largest university in the country, Universidad Autonoma de Santo Domingo (UASD).  The university was founded in 1538 by the Vatican, making it the first university in the Americas.  Now it is a public university with about 100,000 students.  We arrived early enough to have a university official give us a very detailed lecture on the history of the country and the university.  Then we went to the athletic facilities, and while both teams had games at UASD, the basketball pictures are shown below, and those for softball (which has already had pictures in the blog), will be posted tomorrow.  And the lady’s team won their first game in the DR!