This Tuesday morning the class got up early again and met Jo and our coach for another field trip. This time we were heading to Salisbury and Avebury, two smaller towns about 2 hours Southwest of London. Our first stop of the day was at Salisbury and the cathedral that is in the middle of the town. Upon our arrival, everyone headed towards the cathedral to check it out, only to find ourselves surrounded by tons of people participating in the BBC TV show Antiques Roadshow! While being in the show may have been fun, we had more pressing items to attend to, such as signing up for tours of the tower and spire atop the cathedral, going to the Salisbury market, or trekking out to Old Sarum.

The tour of the tower had its grand spectacles, some of which can be seen in the photos below! After climbing a total of about 345 steps (of which we later had the joy of walking back down), we were able to step outside of the tower onto thin balconies and witness the city and countryside around us, a truly freeing experience! We were only able to go out 3 of 4 cardinal directions though, since on the South side a peregrine falcon had laid 4 eggs and was incubating them. Along the way up the steps, we stopped in the roof of the ceiling to see some original wooden framework still in tact over hundreds of years, saw the large timepiece that controls the ringing of the church bells, stopped to see the bells themselves, and witnessed the inside of the spire (pictured below), which someone gets to climb every other week for maintenance checks.

Now for some interesting, and partially scary, facts about the cathedral!! 1. The cathedral only sits atop 4 feet of foundation, which isn’t much at all for the amount of weight it’s holding. This little amount works because the ground beneath is a type of dirt that works like sand, meaning that when it’s wet it holds up really well, but when dry the cathedral would start sinking! To make sure the gravel is wet enough, they have a hole in the middle of the cathedral in which they stick a cross-shaped dipstick to measure the water level. 2. The tower and spire are leaning at 92 inches to the North, which hasn’t moved since 1668. 3. The cathedral houses 1 of only 3 of the world’s oldest working clocks, a true testament to how old this place is!

After our time at the cathedral, we were free to explore the town. Many people made their way to the centre square of Salisbury to the market for lunch. In the small square you could find vendors selling fresh produce, meats and cheeses, clothing, artisan crafts and much more. After lunch several people went to Old Sarum. Old Sarum is the location of the earliest settlement of Salisbury dating back to 400 BC and sits on top of a hill. In the 6th century the fort was used as a strong hold against Vikings and later King Henry I used the location for one of his Royal Palaces. The Salisbury Cathedral is actually the second one the town has had, the first being at Old Sarum during the time of the Roman empire when walls were put around cities to keep people out at night, meaning clergy were locked out of their cathedral and made a request to have one built in another location. When the new Salisbury Cathedral was built the fort was abandoned and dismantled for parts, but the ruins still stand to this day. After several hours of exploration we all met back on the bus and travelled to our next stop, Avebury.

Avebury is a small village that is surrounded by a Neolithic henge comprised of three circles of giant stones. Similar to the famous Stonehenge (which we saw from our bus as we drove by) these stones were erected in the 3rd millennium and represent some of the oldest examples of civilization in Britain. Though archaeologists are uncertain it is believed that they were created for some sort of ritual or ceremony by the inhabitants of the land long ago. When we got to Avebury we were able to walk among the stones and experience these stones up close and personal. Grazing among the stones were several flocks of sheep that the farmers of Avebury use as natural lawn mowers of the land. After a while we got back on the coach and were headed back to London. Being able to experience the English countryside and get outside of the bustling city of London was greatly appreciated and left us all wishing to stay there longer. 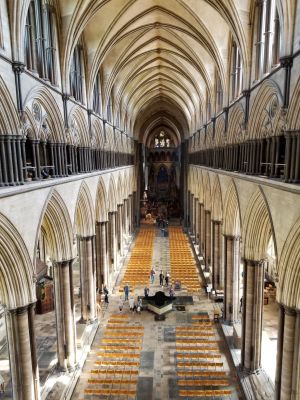 A rare look down the entirety of the Cathedral. 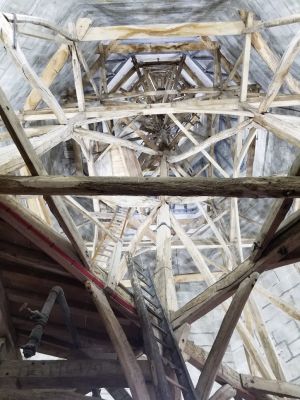 The view from within the Salisbury Cathedral spire. Look at all those steps!

A look out the West side of Salisbury Cathedral after climbing 345 steps!

A look out the North side of the Cathedral 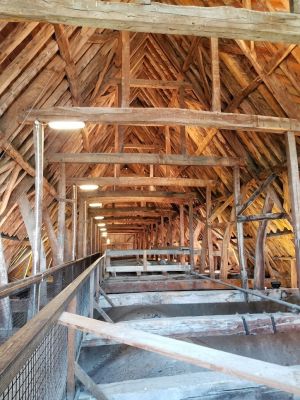 Inside the ceiling of the cathedral

The BBC TV show, Antiques Roadshow, was filming on the lawn of the Salisbury Cathedral.

A vendor selling fresh produce of the market in Salisbury.

Eating food from the vendors in the market of Salisbury. 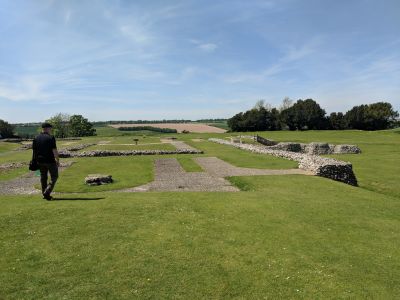 Professor Randy (better known to the group now as Larry) perusing the remains of Old Sarum, the original location of the cathedral.

Boy are we excited to look at the famous stones of Avebury!

The Stones and Sheep of Avebury

Observing the Stones of Avebury

Stonehenge which we saw from our coach windows as we drove by.

A wonderful view of the English countryside in Avebury.

A group of students walking among the stones of Avebury. 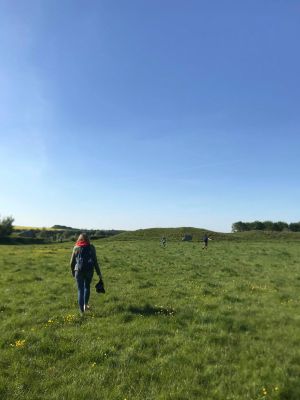 Frolicking through the English meadows in Avebury. 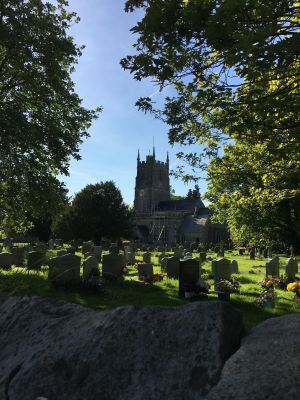 The small Cathedral of Avebury. 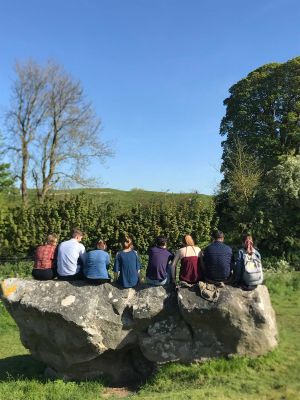 Sitting on a rock in Avebury enjoying the view.