We’re a week into our time in London! Yesterday (May 9), we got out of the city for a day and went to Coventry and Stratford-Upon-Avon. We piled into a coach (the British word for a rented bus) and drove two hours for our first stop.We first visited the Coventry Cathedral. During World War II, Coventry was an industrial city with several car factories that worked on war efforts even before the war began. Because of this, Germany targeted Coventry during one of their bomb raids, now known as the Midnight Sonata. The cathedral, built in the 1500s, was destroyed by the bombs. The provost at the time, Richard Howard, worked to spread a message of forgiveness and reconciliation following the destruction. In the 1950s a new modernist cathedral was built and dedicated to reconciliation. The new cathedral has an overhang connecting it to the old remains, which were left standing. We took a tour of the new cathedral, which includes several fascinating pieces of art, from etchings of the saints to stain-glass windows.

A portion of the old cathedral remnants

After the tour of the Coventry Cathedral, we attended their noon reconciliation service. Part of the Arts in London tradition is for Goshen College students to sing “I Bind My Heart This Tide,” which we did to end the service. Following the service, we were given free time to eat lunch, explore downtown Coventry, and glance at some artwork in the nearby Herbert Museum. Then it was back on the coach for a short drive over to Stratford-Upon-Avon! 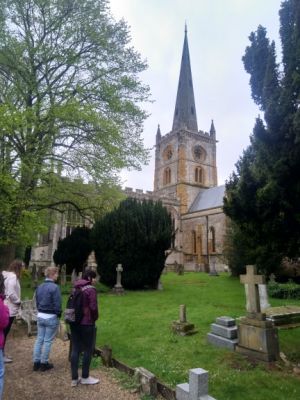 For last part of our field trip, we saw “As You Like It” in the Royal Shakespeare Company Theatre. The play included lots of audience interaction. Our very own Joshua Liechty even played the part of a tree! In the play, Orlando is so in love that he writes poems and posts them on trees around the forest. Josh got to wear a coat covered with post-it notes and pretend to be a tree covered with love notes.

After the play, we piled into the coach one last time and headed back to London.