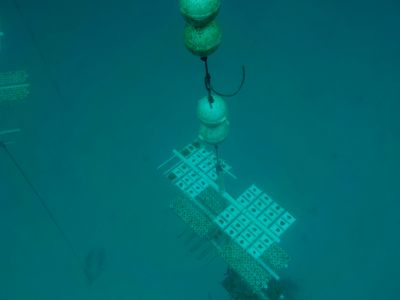 Today has been the highlight of this Marine Biology May term. (The whole trip itself is a highlight but this is a higher highlight.) We had the opportunity to visit the Coral Restoration Foundation (CRF). We learned tons about the decline of coral reefs over the past decades. I’ve learned that the health of coral reefs have declined severely and if we had a chance to snorkel with them when they were beautiful and healthy, I think we would be amazed by the difference in comparison to what we have seen today. Corals are supposed to be a habitat for different marine life; they are supposed to be beautiful 3D structures but we do not get the pleasure of seeing too much of that anymore.

All hope is not lost because of the people who work for and volunteer at the CRF. They have done amazing work trying to replenish the coral population before it’s too late. We were able to see their process of this and learn why this is so important. The first thing we experienced today was a coral nursery called Tavernier Nursery. The people at CRF erected artificial “trees” (made from PVC pipes with alternating branches) and “planted” broken pieces of finger sized coral on it to grow. So far they have six different reefs full of these trees. In the reef we visited today there were 500 trees with about 60 corals on each. That’s 30,000 corals just in one of their six reefs. This can really make a change to our marine system and hopefully we will make our reefs healthy and beautiful. Right now they are growing 3 types of corals – Staghorn, Elkhorn, and Boulder star corals. While swimming above these trees of corals in 20 to 30 feet water we witnessed a hammerhead shark (Sphyrnidae).

After the nursery, we went to a reef called pickles. This reef was an “outplanting” site which means once the corals in the nursery are bigger they are transported to the outplant and glued to the floor so they grow on their own and form clusters. While here we got to see tons more fish than we did in the nursery and some people even saw a nurse shark (Ginglymostoma cirratum).

This has really been a big learning experience for everyone and it’s important for people to know about our marine systems. Just because we don’t live near (or in) them does not make them less important. The CRF can use more volunteers so please visit their website and look more into our once very beautiful (now just beautiful) marine life.