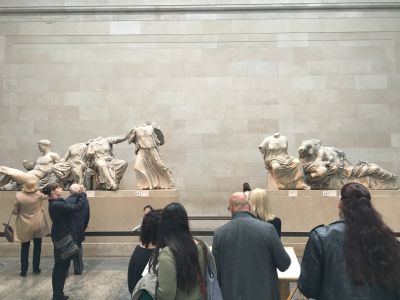 The British Museum is home to the Elgin Marbles. These are the original marble sculptures that sat in the pediment of the Parthenon in Athens. There has been some controversy over whether the marbles should be returned to Athens.

As our trip wraps up, we thought we would take the opportunity to discuss one of London’s most abundant and affordable art-related opportunities: museums. Throughout this trip, students in our group have been visiting many of the city’s galleries. While at home we might be used to visiting Chicago to see its one major art museum, here we have lots of options.

Our art professor, Randy Horst, has given us assignments which involve visiting three of the art museums: The Tate Modern, the National Gallery and the British Museum. In each space, Randy gives us an imaginative prompt like “imagine you were a god – how would you represent yourself in a sculpture?” Or “imagine you were an art collector in the Victorian era – which three paintings would you choose to represent your values?”

With these prompts, we have some sense of direction in the overwhelmingly large museums.

The British Museum contains ancient artifacts from around the world, while the National Gallery shows the evolution of painting over the past several centuries. The Tate Modern stretches our definitions of art and gives us a glimpse into creative possibilities far beyond what we have imagined creating. 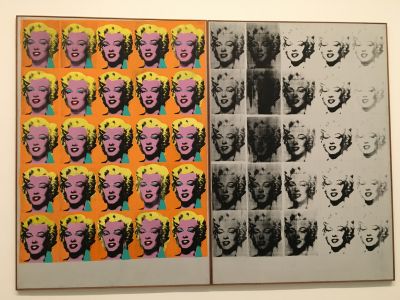 Beyond Randy’s prompts, several students in our group are visiting these and other museums just for fun and for our individual research projects, which we just finished and presented yesterday. As an optional activity, Randy led a group visit to the Wallace Collection, which is housed in an 18th century mansion and features an impressive number of Romantic era paintings. On their own, some students also chose to visit the Victoria & Albert Museum, the Design Museum, and the Tate Britain.

Not everyone in our class studies the arts back in Goshen, and even the music majors among us may not have studied theater and art history, or vice versa with regard to art and theater majors. The museum requirement and Randy’s arts lectures give the students who haven’t studied art since high school a chance to reengage with some of the worlds most famous artworks, all present here in London. 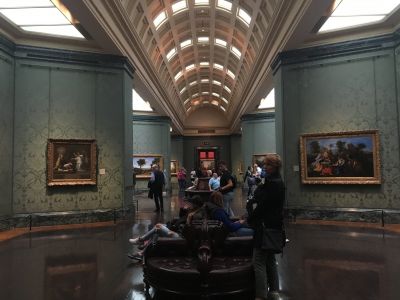 At the National Gallery you can see the likes of Velazquez, Rembrandt, Picasso and Monet.

Several students used museums as the basis for their individual projects, though the topics ranged from culinary arts to prop usage in theater to the architecture of soccer stadiums and analysis of acoustics in concert halls.

Now that our projects are finished, our group is getting ready to go our separate ways. Some of us will be heading back to Goshen, while others have plans to extend their travels in Europe.

Thanks for following along on our London adventures!