Our day began this morning with a beautiful, clear sunrise over the village of Lowville. On our bus ride to Carthage we exchanged stories from the night before about our host families and their unique homes. One group stayed in a 19th century Victorian mansion, complete with servants quarters, sparkling water, and real decoration fruit. Of course the three guys that stayed there conversed with British accents all night and gave each other the names Clarence, Reginald, and  Franklin. A group of girls stayed in the house of a baseball bat maker, and in the morning they each tried their hand at the lathe. This evening after the concert their branded and varnished bats were delivered to them, and they proudly carried them around for the rest of the evening in an impressive, but slightly menacing way.

Once we got to the high school we rehearsed with two of the high school choirs that are led by Marvin Zehr, the father of Jacob and Paul. We worked on three pieces that we were going to perform together, and then our choir sang a few of our own pieces for them. It was good to interact with the students during this rehearsal and over supper before the concert. Some even filled out info cards for GC Admissions!

In the afternoon we hung around the school and did some homework, practiced individually, and rehearsed as a group. For an hour and a half we were given special permission to use the school’s pool, so about fifteen of us played what we called “Ultimate Water Polo Basketball” because of the influences of these various sports on the game. Katie Shank claims that “one team had an unfair height advantage”. From Caleb Liechty’s point of view, it was basically just a one-on-one match between Emily Stoltzfus and Mark Kreider because of the number of baskets they both scored.

There were about 300 people at the concert, and judging from the comments we received afterwords, many people really enjoyed it. It was very touching for everyone to hear the Zehr brothers sing the duet, Au Font du Temple Saint which they did at Concerto-Aria. As this is their hometown many of the people in the audience knew them. After the concert we mingled with audience members, our hosts from the night before, and the high school students. Caleb Liechty had quite the following of adolescent girls who all wanted to take a picture with him. Scott Hochstettler claimed that it was just his Djembe playing that impressed them, and right then and there Jose made the decision to give up the cello and devote all of his time to mastering the Djembe.

We got to Beaver Camp pretty late, but before we went to bed Paul led some of us on a night hike through the woods. It was very cold since the camp is at a little higher elevation, but the full moon and the pine forests covered in snow were gorgeous. We were able to warm up afterwards by sipping hot chocolate around the fireplace in the main lounge while listening to soothing French impressionist music played by our resident piano students. It was a perfect end to a great day. 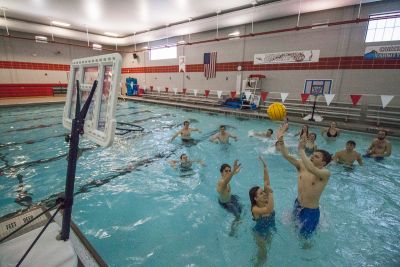 Simon goes for the shot.