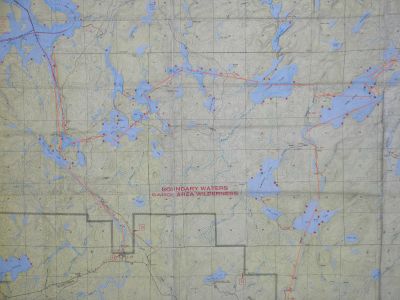 This map indicates our entire path across only a small section of the Boundary Waters, as we transitioned from East Loon Bay to Shell Lake, through Lynx Lake and into Lake Agnes before exiting through Nina Moose River.

I don’t like saying goodbye to the Boundary Waters.  I’ve only had to do it twice in my life, but each time has been dreadful.  Yet on our last day, each of us were forced to bid the Waters farewell.

To me, the Boundary Waters represent freedom from the daily grind, from the unnatural civilization mankind has made for itself.  The wilderness has its dangers and struggles, but also has a way of simplifying a person’s life and providing a sense of mental clarity.

For the entire week of this course, all that mattered was how we were going to work in concert with nature, and how act as a part of it as we navigated from lake to lake, hoping for an ice-free lake after the next half-mile portage.

However, all good things must come to an end, and on that Saturday morning our group awoke very early to dismantle our tents and load up the canoes for the last time.

As we paddled across Lake Agnes, the sun was hidden by a thick layer of gray cloud cover.  As if beckoning us to reconsider and set up camp again, those clouds began raining on us shortly after entering the Nina Moose River on the Southwest side of Lake Agnes.

Early on Saturday morning, we broke camp and headed south to Nina Moose River, which flows through Nina Moose Lake and links with a portage trail out of the Boundary Waters.

We powered through the rain, which continued throughout the day.  At each new portage, we hoisted our waterlogged packs onto our backs before putting a canoe on our shoulders.

Halfway through the Nina Moose River lies Nina Moose Lake.  We found our bearings with the compass, and on the South side of the lake were forced to search through the marsh for the best entrance to the rest of the river.

Nina Moose River flows from South to North, thus our struggle through the rain was an upstream struggle.  Apart from the two short portages on the second section of Nina Moose River, beaver dams were a constant obstacle. 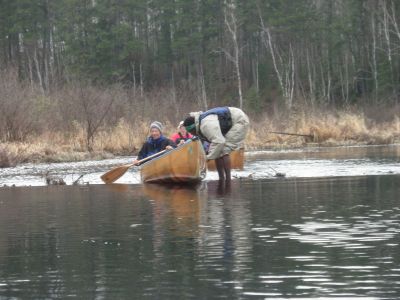 Some dams that were under construction would shape the current, while others that were near completion forced us to find a way through the narrow, shallow stream in the middle of the dam.  One person from each canoe would get out and pull the canoe through the dam before reentering their seat and continuing on.

On another portage circumventing a set of rapids, the mud was so thick and runny that if you weren’t slipping around, you were slowly sinking.  That particular portage wasn’t on the map.

As we approached our last portage, we were greeted by a small group of poncho-wearing voyageurs preparing for their trip through the Waters.  Taking multiple trips up and down the portage trails, these travelers were in for an adventure through beaver dams, strong currents, and relatively strong rainfall.

A sigh of relief came from me as I reached the end of the portage trail.  I dropped my pack and took a swig of water before heading back down the 160 rod trail to help the rest of my group. 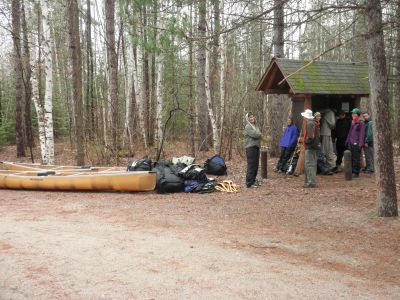 At the end of our final portage, we waited beside a parking lot until our chauffeur brought us back to Wilderness Wind.

Realizing that we were two hours behind schedule at our intended exit point, our chauffeur drove to the next exit point where we were waiting to be returned to Wilderness Wind.

Immediately after arriving at the camp, we emptied our packs, food bags, and tents, and gave them all a thorough cleaning.  The greatest reward, though, came from taking showers.

We were all cleaned up and smelling normal again, we headed into town for dinner at a local steakhouse called the Chocolate Moose, trading stories and memories from the trip.

That evening, we shared the most powerful moments for us individually.  The experience brought about childhood experiences, memories of lost loved ones, admiration for natures beauty in spite of flaws, and dealing with the unexpected.

As we shared within the group, it became clear to me that even though this was a group experience, each of us had an individual experience of the Boundary Waters that will stay with us for a long time. 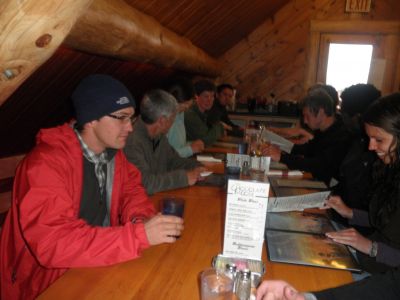 After cleaning ourselves up, our group was treated to a meal at the Chocolate Moose: Ely’s finest steakhouse.

The Boundary Waters is, for me at any rate, so much more than an experience with nature–it becomes a reconnection with my soul, my past, my potential, and my existence.  It forces me to think about my impact on the world, and ultimately the world’s impact on me.

For the most part, none of the people in this group knew each other before the trip.  And by the end of it we weren’t automatically best friends–but we were all aware that we had gone through a strange, beautiful and powerful experience in the wilderness.

Waking up at five in the morning and driving South became a surreal experience of reentry into what we considered normal.  Our pit stops became warmer and warmer, and near Chicago we were surprised by the 80˚ weather.

As we unloaded the bus on Goshen’s campus that evening, each of us said our goodbyes, wished each other well, and parted ways for the summer, knowing that we had been shaped by our brief visit with the wilderness.