The Boundary Waters is truly a spectacle of natural wild beauty, yet one of the most prominent and memorable features of an experience on the water is late night stargazing. 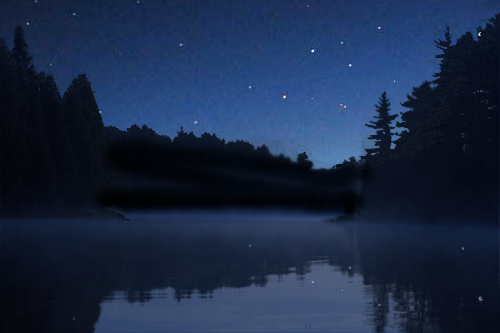 The crystal clear nights in the Boundary Waters expose a myriad of constellations, both in the sky and on the water. (Photo courtesy of Piragis Outfitters’ Blog).

Though it is extremely difficult to photograph at this time of year, the BWCA is one of the few places where one can see a perfect reflection of that stars on the water surface.  The result is a stunning duplication of the night sky, and might be the only way to see the Big Dipper by looking down instead of up.

At the end of our fourth day, we found ourselves on Lynx Lake, again waiting for a clearing through a sheet of ice.  It proved to be a perfect evening for stargazing, with little wind or current to push us along.

I remember from my trip in August that we were able to see constellations on the lake, but on this particular night on Lynx, the light reflecting off the moon proved too intense for such scenery.  Nevertheless, the moon and a few stars could be seen glistening on the surface of the lake.

However, a strong glow seemed to emanate from our Northeast, which we concluded must have been the Northern Lights.  Had we been on this lake a few months earlier, when ice and snow would have covered the water, we might have even witnessed the Aurora Borealis.

Unfortunately, the moon kept us from seeing another piece of the night sky: the dusty strip of the Milky Way.  Even as junior Daniel Graber attempted to wake up in the middle of the early morning to see them, the moon’s presence still made that impossible.

Even though the sky was covered with clouds during the day, with heavy rainfall and wind, the evenings were typically very calm, relatively clear, and pleasantly serene.  Granted, the moon might lend a little bit of light pollution, the clarity of the BW night sky is crystal clear compared to that of the average backyard. From our campsite on Shell Lake, we paddled Northeast through Little Shell Lake into Lynx Lake. Reaching yet another sheet of ice, we decided to head to a nearby campsite for the evening.

When we arrived on Lynx around lunch time, the ice obstructing our path to the next portage was very thin.  We headed South to the nearest campsite for lunch, and by the time we made camp the ice had been blown past us on the lake, and melted before nightfall.

As some of us tried to backtrack for some fishing on Little Shell Lake, two loons attempted a take off, nearly hitting a canoe head on.  Instead, the loons merely skipped and flailed across the water, flapping furiously in an attempt to get airborne, before running out of lake space and returning to a calm float.

That evening, after fishing to no avail, a few of our group paddled to the middle of the lake, and laid back to watch nature’s display of distant stars, twinkling like candles in the sky.

Even though we stayed up way later than we knew we should have, each of us would say it was worthwhile.