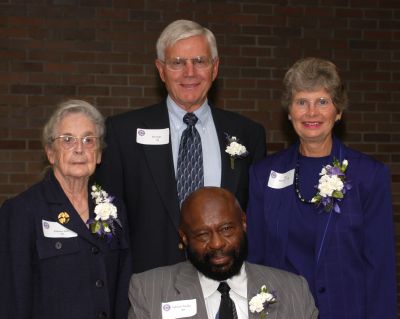 Sylvester Outley ’69 knows the harsh realities of drug addiction and street life, but he also understands the power of transformation. Once one of the 10 most wanted criminals in Texas, Outley now is founder and director of SELF Inc., one of Philadelphia’s largest drug rehabilitation programs. By age 30, Outley had been arrested 86 times for drug involvement and swindling, and was eventually sentenced to 10 years imprisonment in 1955 – years of paradox which he later said were dehumanizing, yet gave him self-understanding, allowing him to transcend drugs and gain meaning in life.

Outley earned his G.E.D. before graduating from Goshen with a social work degree. He earned master’s and doctorate degrees before founding the SocioEmotional Learning and Family Center in Chester County, Pa., a therapeutic residential program for criminals, as well as Outley Professional Services, an outpatient drug and alcohol facility in Philadelphia, Pa., which became SELF Inc. SELF now has a $4 million annual budget which includes emergency shelters, peer outreach, transitional housing and community revitalization programs. More than just sobriety training, SELF teaches that addicts must use the basic life principles of love, respect, truth, honesty, care, compassion and forgiveness to rebuild individual lives.

Outley’s work in transforming the city’s shelters from havens for addiction and crime into bases for recovery and wellness has become the model for Philadelphia’s entire shelter system. And SELF continues to allow people to realize their full potential as “humans made in God’s image” by rebuilding their lives – one at a time.

Ed ’58 and Theo ’57 Hartzler Yoder have a passion for Mennonite higher education and service and have set up means to help students take advantage of both. Natives of Archbold, Ohio, the two initiated the Harold and Dorothy Hartzler Scholarship Fund and the Early Pioneer Nursing Fund at Goshen College and the Anna Smith King Nursing Scholarship at Hesston (Kan.) College. Additionally, they were instrumental in starting a student aid fund at Zion Mennonite Church in 1982 that has supported 124 students through college.

Ed, an accountant at Sauder Woodworking since 1968, spent 12 years on GC’s Board of Overseers, also serving on steering committees for the college’s two major capital campaigns.

Theodosia, a retired obstetrics nurse, has taken medical mission trips to five different Central American countries and has been active in Meals on Wheels, Hospice and Hands of Grace, an interfaith volunteer organization that provides adult daycare for elderly and disabled persons. After working at Fairlawn Haven retirement community as a nurse, she became its auxiliary president in 1991.

President Shirley Showalter said, “Theo and Ed have created one of the most generous church/college aid plans in the U.S. They live simply and give generously.” The Yoders have four adult children who all attended Goshen College.

Kathleen Zehr ’40 has arranged brilliant bouquets of flowers at her church for more than 30 years, yet her contributions to her Lowville, N.Y., community span even longer. A retired home economics teacher, Zehr received a master’s degree in education from Columbia University Teacher’s College in 1942 and taught at Beirut Lebanon College for Women for a year before returning to New York, where she has been a Sunday school teacher for 53 years and volunteer church secretary for 20 years.

In addition to her service in church, Zehr has devoted herself to care of the elderly and to higher education. She was a founding board member of Brookside Mennonite Retirement Community and developed the Lewis County Hospice program where she continues as a volunteer. Zehr served as president of Lowville Civic Club, which gives educational scholarships and was involved in the Delta Kappa National Sorority, providing educational scholarships for Native Americans. In addition to her involvement in the Lowville Head Start Program, she was president of the historical Constable Hall board for more than 20 years and president of the Willing Workers Sewing Circle.

In 2000, Zehr received the United Way Senior Citizens Award for willingness to contribute to her community.