After a brief hiatus while journeying to Peru with Goshen College’s SST program, I’ve come back once again to join you, dear reader, with this newsletter. While I did service abroad, painting ceramics with a family of artisans, it may appear that I took a break from psychology. Yet I also spent lots of time thinking about culture and belonging. I additionally had the opportunity to reflect on how the lack of mental health services in the rural Andes contrasted with the high density of services in urban Peru. While I was happy to take a break from the textbooks and papers of normal semesters, I was able to consider psychology’s workings in a more application-based manner.

This time is one of our last together, since I write as a senior nearing the end of their college experience. We must try not to anticipate the end of our time together too dejectedly, because there is many an exciting article of news to discuss, both on campus and in the broader world of Psychology.

This semester we have already been graced by the presence of two local speakers at Psych Forums. One of those was Kate Irelan from LaCasa, who spoke about the work the organization does with their financial programs and building projects in the community.

The second speaker we heard from was Matt Garber, a school counselor at New Paris Elementary. In his talk, Garber described how part of his role is to work with students to improve their academic success, while recognizing that academics may not always be the most pressing issue in their lives. 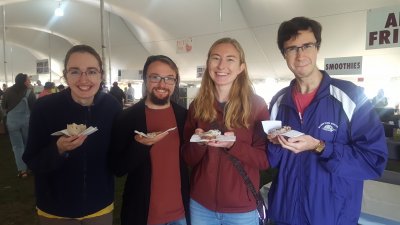 One of the greatest kept secrets within the Psychology department has to do with a delectable, sugary item that makes its debut once a year in the fall. Have you guessed it? Hint #1: it involves a fall-favorite fruit. Hint #2: You will find it at the end of long lines at the Elkhart County Fairground on just two days a year. Hint #3: Do the taglines “Gluttony for God,” “Cholesterol for Christ,” or “Heart Attacks for the Holy Spirit” ring any bells? (Coming up with those slogans was a combined effort of Julie Reese and her students.) Still not sure? Well, that’s why it’s a secret, my friends. But I’ll let you in on it: apple fritters.

It is a long-standing tradition for Department Head Julie Reese to hand out free fritters to Goshen College students at the Michiana Mennonite Relief Sale each year, the result of an annual donation made by her and her husband. This year the department was thrown into brief chaos after learning that she would be missing the sale as a result of a prior commitment. However, Reese came through yet again, handing out fritter tickets that her husband designed ahead of time on campus. Below is a photo of a few students and recent alumni enjoying the heavenly morsels.

Diana Ortega is a Goshen native who’s currently a 4th year Psychology major. In addition to being a full-time student, she has been working for two years at Bashor Children’s Home, a residential and day treatment facility for at-risk youth. Her role there is Youth Care Specialist. She explains that her job includes a range of duties. During the school day Ortega accompanies kids to school as a paraprofessional, helping students who often have limited educations, due to being kicked out of high school, to pick up new learning strategies. Later in the day she often goes with children and teens to mental health groups which are led by a Skills Trainer from Oaklawn. She engages with the kids in the group, interacting with them as a part of the group and working to gain their trust.

Diana explains that she is always with the residents, and because of that, she’s often the first one to address issues that arise and process things with them, such as when one of them has a bad therapy session at school. Since residents are often there for six to nine months, she gets to know them and understand their unique needs, whether that means being left alone or processing things aloud.

On the weekends, Diana’s role looks slightly different. Residents are allowed time to go into the community on outings, which means she gets to accompany them. During these times, she plays the role of teacher, introducing them to important aspects of community reintegration. She is the one who reminds them that their actions influence the people around them. By indicating how behaviors such as talking in a movie theater or cussing in public are socially unacceptable, she serves as a role model that not all of the youth would have had growing up.

One of the things Diana is emphatic about is that it’s important to show the kids that you understand where they’re coming from. She demonstrates how the basis of a connection is formed with the youth when you explain that you understand that acting in a certain way was normal where they grew up, but that other people in the community see it differently. Acknowledging their perspective can help to inspire trust in each other.

When asked about what was most challenging and rewarding on the job, Diana explained that the job can be difficult, because there are so many people there that she can’t help. She realizes that none of the staff can fix everything in the residents’ lives. However, building relationships and seeing that progress has been made since when the youth were admitted is what makes the job meaningful.