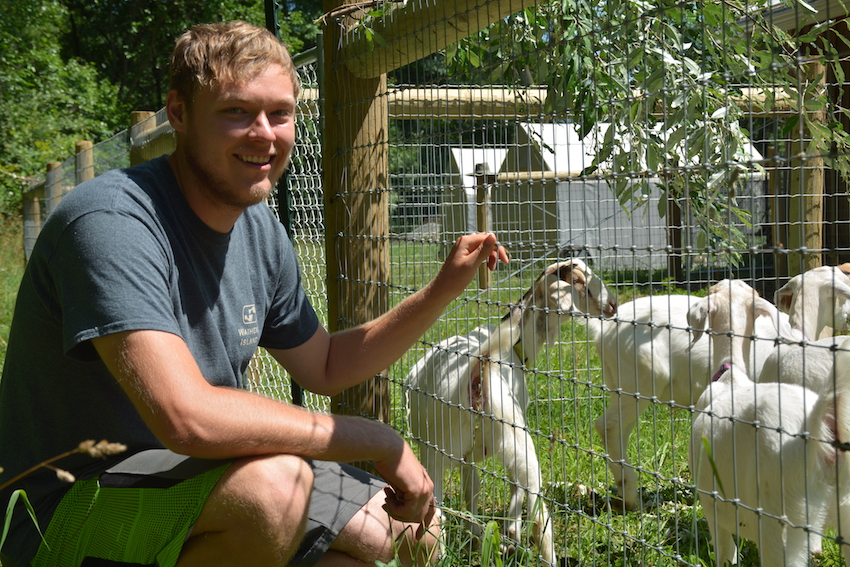 Clayton Wassilak, a rising senior from Augustana College, Rock Island, Ill., is a man of many interests with the desire to tie them all together. The Agroecology Summer Intensive (ASI) at Merry Lea Environmental Learning Center of Goshen College is helping him do that.

Clayton is pursuing a double major in biology and environmental studies with a minor in geography. While biology helps him understand individual organisms, geography gives him an understanding of the places they inhabit and why they live there.

“In order to understand the life forms in an environment, you need to understand the geography,” he explains, citing the fact that north and south facing slopes host different species of plants. For Clayton, a class on a topic such as soils is an opportunity to learn how “biology, geology and geography crash into each other in the creation of soil.”

“This made me think of you,” a botany professor at Augustana told Clayton as he handed him a flyer on Goshen College’s ASI. Students from any college can come for the summer and transfer their credits back to their home institution.

The ASI is an ideal setting for a student who is interested in the way multiple disciplines interact. Students live on a farm that is nestled within a nature preserve, and the director of the program has a passion for systems thinking. Clayton was particularly attracted by the chance to see the farm’s five acres of woody perennial polyculture in operation. He had already done a lot of reading on his own about topics like food forestry and permaculture.

The WPP, as this area is known, contains a mix of nut trees, fruit trees, grape vines and brambles such as raspberries and currants. Asparagus takes advantage of the sun that is still available before the trees cast too much shade. The mix of species mimics a wild ecosystem and the varying heights enable pollinators to access the area. Domestic animals share the area as well. Belted Galloway cattle graze in fenced areas between the rows, leaving fertilizer behind. Chickens scratch beneath the brambles, converting dropped fruit into meat.

“I like the idea of modeling systems after natural systems; of working with the natural system rather than against it,” Clayton says.

Merry Lea’s goats are an example of what Clayton means, and they are a particular favorite of his. Goats will happily browse on invasive species and woody plants that need to be controlled on a farm. He enjoys bringing them treats of nearby brush that that they cannot reach from their pen.

Clayton has many ideas for his future, from breeding resilient, genetically diverse crops to land restoration to education. He’d love to heal damaged land, bringing it back from barrenness to biodiversity. He’d also love to be the person that makes someone’s face light up when they are inspired by a new idea.

“That’s happened to me so many times,” he smiles.