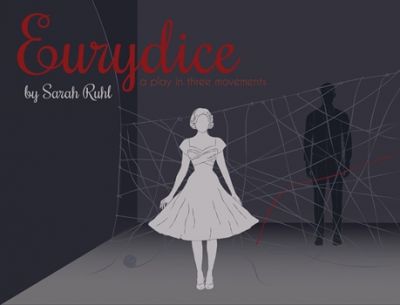 A play in three movements, directed by Michelle Milne, M.F.A.

Eurydice, by Sarah Ruhl, winds romance, death, humor, whimsy, music, and poetry together into a play in three “movements.” Ruhl’s contemporary version of the Greek myth Orpheus is told from the point of view of his wife Eurydice, has subtext that resonates with the death of Ruhl’s own father, and incorporates elements of magical realism.

Eurydice loves literature, and her new husband Orpheus loves music. They attempt to communicate through these related but different languages (literature and music) – leading to some communication challenges, as well as delightfully playful dialogue. Other characters include the child-like, spoiled-brat Lord of the Underworld; Eurydice’s endearing father; and a Very Interesting Man (or at least, he believes  he is) – otherwise known as the Nasty Interesting Man, who lures Eurydice to his ultra-high condo on her wedding day. Characters write letters to each other, sent from life to death and back again; Eurydice builds a room out of string; and she travels in a raining elevator. Ruhl’s Eurydice lends itself to playful, dreamlike, and creative interpretation of staging, design, and character – an exciting opportunity for all.