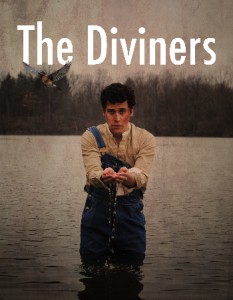 Winner of the American College Theater Festival, and written when Jim Leonard, Jr. was just 19 years old, this marvelously theatrical play is the story of a disturbed young man with an uncanny gift for finding water and his friendship with a disenchanted preacher in southern Indiana in the early 1930s.  When the boy was young he almost drowned. This trauma and the loss of his mother in the same accident left him deathly afraid of water. The preacher, set on breaking away from a long line of Kentucky family preachers, is determined not to do what he does best, and instead works as a mechanic for the boy’s father. The town doesn’t have a preacher and the women try to persuade him to preach while he tries to persuade the boy to wash. When the preacher finally gets the boy in the river and is washing him, the townspeople mistake the scene for a baptism. They descend on the event that sadly changes from sacred to tragic.

The Diviners by Jim Leonard, Jr