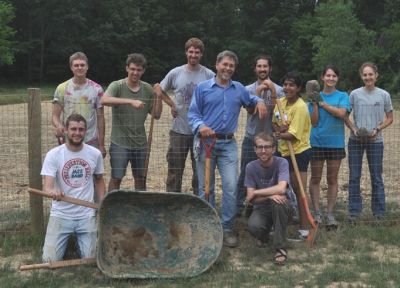 While each of us might be here for different reasons, we are all enjoying dealing with the issues of food: where it comes from, what kind is best, how to raise it, and of course, how to eat it. We are interacting with each other around all of these levels, whether we are sowing sweet corn, digging thistles, or baking bread.

We had the pleasure of working with Dr. Larry Yoder, a retired Goshen College professor, who is as enthusiastic about geology and soils as a kid is about candy. Dr. Yoder introduced us to the fascinating world of clay chemistry as we explored how nutrients are held and released as positively charged ions by tiny clay particles. It turns out that clay can both make and break a soil, depending on how much is present and how the soil is managed. 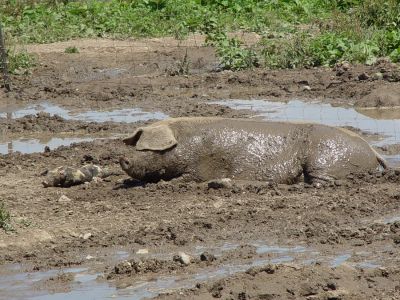 A major work project came to a joyous end, finally breaking up an undesired ecological relationship: that between the resident groundhogs and our cabbages. In what took us several afternoons of sweaty teamwork, we completed digging a trench (and filling it with stones) so that the grass won’t grow up around an electrified low wire that runs the perimeter of our biggest garden.

On Friday we drove about an hour to Lagrange County, where farmer Greg Gunthorp welcomed us to his family farm operation, where hogs, turkeys, chickens and ducks are raised. Gunthorp Farms is one of the smallest farms to run their own butchering and processing facility approved by the USDA. They are also distinguished by the fact that their animals spend the majority of their lives outside, on pasture. This practice has rewarded the Gunthorps – they sell their meats to some of the most expensive restaurants in Chicago. When the visit to Greg’s farm came to an end, he generously sent us on our way weighed down with chicken breasts, bacon ends, and a gigantic ham! Thanksgiving in June!