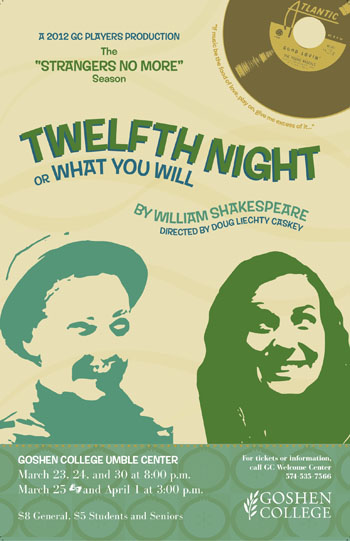 GOSHEN, Ind. – Shakespeare plays often conjure up images of men in tights and women in corseted dresses, but this production of Shakespeare’s “Twelfth Night; or, What You Will,” put on by the Goshen College Players for the 2012 spring mainstage production, is more likely to remind you of AMC’s hit TV show “Mad Men.” The production is set in the American 1960s and includes music inspired by pop/folk singers of the day, like a youthful Bob Dylan, The Young Rascals, Ray Charles and Peter, Paul and Mary.

While this production may look different than a typical Shakespeare play, it still features jealousy, mistaken identity, cross-dressing, duels and speaks of the madness of love – all classic Shakespeare. When some shipwrecked strangers get washed ashore in the world of Illyria (an imaginary seaside American city), a playful entanglement of music, love, mistaken identity and trickery ensues.

“Our setting of the play in the 1960s provides the changing cultural landscape necessary to shed light on gender dynamics that are prevalent in the play,” said Patrick Ressler, sound designer/music director and 2011 graduate. “Twelfth Night” features several powerful female roles. “Each woman in the play has considerable sway over her male counterpart,” said Ressler.

The production will include music, starting with songs from 1963 and moving chronologically throughout the play to music from 1966. “Live music is an important element in a show with the opening line ‘If music be the food of love, play on…’” said Ressler.

Projected images referencing the 1960s will also be incorporated into the show. “The period is driven by trends of style and is rich with visual interest,” said Ressler. “As soon as you walk into the space, you will see projected images from the 1960s, inviting you travel back to this volatile era.”

The approximate run-time for the show is two-and-a-half hours, including a 10-minute intermission. Umble Center is accessible to wheelchairs and people with other physical limitations. American Sign Language interpretation will be offered during the March 25 performance of the play.

Tickets cost $8 for general admission and $5 for students and seniors, and can be purchased in advance through the Welcome Center by calling (574) 535-7566, emailing welcomecenter@goshen.edu or online atwww.goshen.edu/tickets. Tickets can also be purchased at the Umble Center Box Office one hour before the show.