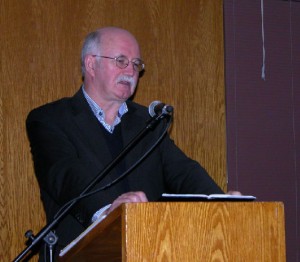 Fallon’s connection with Goshen began nearly forty years ago, when Professor Emeritus John Fisher, who was leading Goshen students on an Ireland literature and peace class, heard that Fallon was going to be at a writers’ week and sought him out. Fisher and Fallon became close friends, and Goshen students on Fisher’s subsequent trips, which continued over a thirty-year period, met with Fallon, some even staying overnight at his estate. In addition, Fallon was the S.A. Yoder lecturer at Goshen in 1983.

On the evening of November 2, 2011, Fallon gave a reading in Newcomer Center. After an introduction by English professor Ann Hostetler, Fallon began by reading “Gate,” a poem from his 1998 collection, News of the World: New and Selected Poems. Through the rest of the reading, Fallon interspersed his poems with personal anecdotes that gave background about the poems’ content.

“I really enjoyed the stories he told about his poetry, as well as the topics presented in his works,” said sophomore Kate Friesen. “His awareness of the world around him was apparent in his poetry.

Among the poems read were “Fostering,” a poem based on a connection between Fallon’s experience with newborn lambs on his farm and the biblical story of Jacob and Esau, and “My Meeting in Maine,” which came out of Fallon’s attempt to see his first moose, while he was living in New England. Fallon concluded the event by answering audience questions and reading a final poem, “The Late Country,” in response to a request.

“I was immediately won over by Peter’s charm and heartwarming poetry,” said John Miller, a sophomore and grandson to Professor Fisher.

The following morning, Fallon visited Hostetler’s Introduction to Literature class, which has a poetry focus. He started off by reading “A Will,” which, Fallon explained, evolved from several experiences and is both about “will” in the sense of a determination to live and “will” as a legal document by which one passes things on to the next generation. Fallon continued by answering students’ questions about his career and his thoughts regarding poetry.

Fallon first responded to a student’s question about the Gallery Press, which he started when he was eighteen. Fallon emphasized that he did not set out to create a publishing company and that the press grew gradually. When he was in his late teens, Fallon and a friend had been organizing readings in Dublin and started a small poetry magazine. Fallon noticed that two people’s work stood out, and because there was not a publishing press in the area that seemed open to young people’s writing, Fallon published a collection himself. This endeavor evolved into The Gallery Press, which currently publishes the work of leading Irish writers including Nobel-Prize-winner Seamus Heaney, who is a friend of Fallon’s.

Fallon also discussed his widely-respected translation of Virgil’s poem “The Georgics,” a project that involved translating about ten lines a day for about three years. “Central to a translation has to be a hope or impulse to honor the original, and I know that was very much in my mind as I proceeded with “‘The Georgics,’” he said. Fallon mentioned that “The Georgics” was of particular interest to him because it deals with both farming and the aftermath of a civil war, and Fallon himself lives on a farm near to the border of Northern Ireland, an area that has a history of violence.

In addition, Fallon talked about his writing process and his view of poetry. Fallon stated that he does not have a set routine or timetable for his writing, but that he carries around a small notebook in which he jots down experiences or phrases that stand out to him. He eventually sits down and looks at the notes, considering their content as well as possible form and rhyme. “I think of poetry as something rooted in experience but mediated somehow through consciousness,” Fallon said. Fallon emphasized that people never truly learn to write poems, but rather start anew each time they begin one. “In my life, the attempt to make poems is still one of the most ordinary things I can imagine,” Fallon said. “But it is at the same time utterly mysterious, because I can’t explain how it happens or why one thing becomes the subject of a poem.”

Fallon honored the English department with a Broadside poem titled, “Elegy.” These one-page publications of poetry and short prose are personally signed by the author.

“It was great to welcome Peter back to Goshen, where he has had many connections over the years,” Hostetler said. “He emanated an aura of authenticity that completely won the hearts of my students.  It was beautiful to see.”