English students/ Megafauna members read at Art in the Barn. 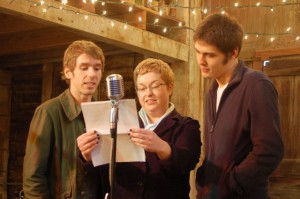 On the crisp evening of October 1, a group gathered in the rustic barn at Red Tail Farm in Goshen for a time of art and fellowship at the third annual Art in the Barn, a community art show. This year, the Art in the Barn celebration was expanded to include a new type of arts event—a reading of poetry, fiction, and memoir.

A crowd of about fifty attended the reading. Listeners sat or stood, many during the entire hour of the reading, sipping steaming cups of cider and nibbling pumpkin cookies while relishing the barn’s atmosphere as well as the writing.
“It was such an amazing experience to listen to poetry in such a beautiful, strange place—in a chilly barn, decorated in art and strung with lights,” said Stoltzfus, a sophomore at Goshen.

Nine people read at the event, including the members of Megafauna, two Goshen College English professors, and others from the Goshen community. Readers shared both poetry and prose, both original pieces and the favorite work of others. Topics ranged from killer bees to inkblot tests to the Khmer Rouge to a well-worn pair of jeans.

The works read included “First Lesson,” a poem written by Stoltzfus that was inspired by her grandmother and the piano lessons Stoltzfus took from her during her childhood. “It was my way of trying to put into words the gift of music she has given me,” Stoltzfus said.

Jessica Baldanzi, one of the professors who participated in the reading, shared a section of a fiction piece about a couple’s trip to Italy during the early stages of the woman’s pregnancy. Ann Hostetler, the other professor who participated, read recently published poems that highlighted local settings such as the Merry Lea Nature Center and Rachel’s Bread.

All the members of Megafauna, along with Adam Scharf, the owner of Red Tail Farm, concluded the literary portion of the evening by reading two humorous, collaborative pieces about cows. Many guests stayed on to peruse the visual art on display and to listen to the 8:00 concert by Sara and the Adams, a local band that includes Wakefield as a vocalist.

Megafauna began in January of 2011, and all of the current members had joined by the following summer. The group gathers at a different member’s home for an hour or two each week. Meetings typically begin by reading aloud an inspirational poem or prose excerpt and then continue with writing exercises to help generate ideas and creativity. Group members also share and critique original work, all while enjoying snacks and the hilarity that ensues when a group of creative spirits gathers together.

“Megafauna isn’t only a writers group; it’s also a community of friends,” said Weaver-Stoesz, a senior at Goshen.

Though this was Art in the Barn’s third year, it was the first time the event included creative writing, and it was also the first public reading for Megafauna as a group. The writers’ group had been hoping to find a venue for sharing their work with the wider community, and Derstine, who was helping to organize Art in the Barn, realized it would provide a great opportunity to do so. Group members, who had created posters and advertised on Art in the Barn’s website and Facebook page, were pleased with both reader and audience turnout as well as the variety and quality of work that was read.

“I liked that some people happened upon the reading when they arrived to look at artwork in the barn gallery—which is the prime attraction of the event—and others came specifically for the reading, but ended up looking at the art as well,” Derstine said.

For Hostetler, who had each of Megafauna’s members in her class at some point, one of the joys of the evening was seeing how her former students “were supporting and challenging each other to develop their creativity.” Baldanzi, who had several of Megafauna’s members in a memoir class last spring, was excited to see them take their work out of the classroom and into the public.

In addition, Megafauna plans to schedule additional open mic readings in the future, including one later this fall. If interested in learning about upcoming Megafauna events, contact Derstine at elise.derstine@gmail.com.
~ Lauren Stoltzfus